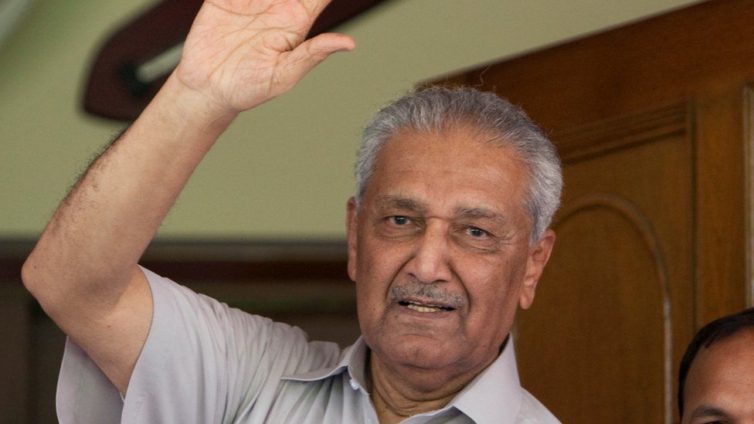 Abdul Qadeer Khan was put under house arrest until 2009

The man regarded as the “father of Pakistan’s nuclear bomb”, Dr Abdul Qadeer Khan, has died aged 85 after being hospitalised with Covid-19.

Dr Khan was hailed as a national hero for transforming his country into the world’s first Islamic nuclear power.

But he was also notorious for having smuggled nuclear secrets to states including North Korea and Iran.

“He was loved by our nation because of his critical contribution in making us a nuclear weapon state,” the prime minister tweeted.

Known as AQ Khan, the scientist was instrumental in setting up Pakistan’s first nuclear enrichment plant at Kahuta near Islamabad. By 1998, the country had conducted its first nuclear tests.

But he was arrested in 2004 for illegally sharing nuclear technology with Iran, Libya, and North Korea.

The revelations that he passed on nuclear secrets to other countries shocked Pakistan.

In a televised address, Dr Khan offered his “deepest regrets and unqualified apologies”.

Dr Khan was pardoned by Pakistan’s then-president, Pervez Musharraf, but he was held under house arrest until 2009.

The leniency of his treatment angered many in the West, where he has been dubbed “the greatest nuclear proliferator of all time”.

But in Pakistan he remained a symbol of pride for his role in boosting its national security.

“He helped us develop nation-saving nuclear deterrence and a grateful nation will never forget his services,” President Arif Alvi said.