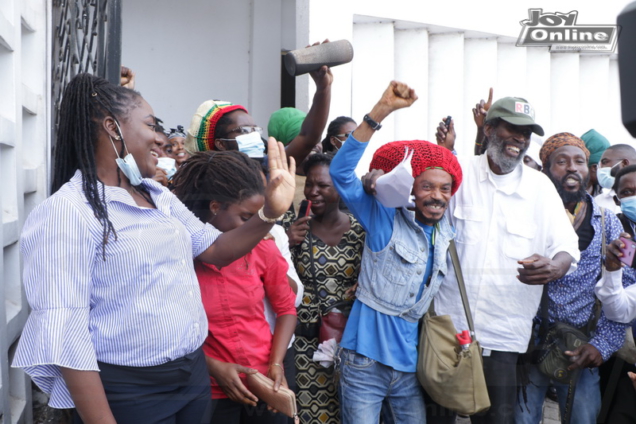 Tyron Iras Marhguy recently sued Achimota School and other stakeholders after the school denied him and Oheneba Kwaku Nkrabea admission because of their dreadlocks.

The school authorities asserted that they would only admit them if they cut off their dreadlocks, which symbolize their Rastafarian religion. Marhguy, Nkrabea, their parents, and the Rastafarian Council of Ghana fiercely opposed Achimota School’s arbitrary decision and garnered support from many well-meaning Ghanaians.

Their unflinching resistance culminated in a lawsuit against Achimota School among others.

Achimota School claimed that its decision to deny Marhguy and Nkrabea admission was premised on the school’s long-standing rule of keeping short hair as a student. This rule is actually applied in all public Senior High Schools in Ghana.

The fact that this ingrained rule is satisfactory and needs to be maintained cannot be gainsaid. Because it enforces discipline in school, ensures submission to authority, and promotes propriety among students.

Well, I personally subscribed to Achimota School’s justification, and I did so purely on the basis of discipline. I did not want the abolition of that rule to open the floodgates of hairstyle crisis in our Senior High Schools.

I was deeply worried that it might encourage some students to keep their hair improperly in school with impunity all in the name of personal freedom. My sentiments, like that of many people, were rooted in morality and had little or nothing to do with the law.

But, as a constitutional law enthusiast, I knew very well that Achimota School’s unfair and high-handed decision was unconstitutional and would be annulled in the court of law. The Rastafarian-Achimota School stalemate was much more constitutional than people thought. People were too sentimental during the discourse and disregarded the law (our Constitution). In fact, sentiments cannot override the rule of law in any court.

The onus was on Achimota School and the other stakeholders to prove beyond reasonable doubt that the decision to deny the Rastafarian students’ admission was not unconstitutional.

The school authorities had more burden of proof, because they needed to show that their decision was not discriminatory against the students and that it did not violate their constitutional rights to education, dignity, and free expression of religion.

The judge in her ruling declared that Achimota School’s decision was a violation of the Rastafarian students’ fundamental human rights enshrined in Ghana’s Constitution.

However, many seemingly conservative Ghanaians disagree with the Accra High Court’s ruling. People even make moral yet highly satirical arguments to buttress their opinions. Their claims that this court decision will, in the guise of personal liberty, introduce all manner of improper dressing in Senior High Schools are both laughable and improbable. For the court decision did not suggest that we treat morality or propriety in our schools with disdain.

Besides, some students and their parents may take advantage of this historic court decision to deliberately break school rules regarding propriety.

But the Constitution has no place for unjustified breach of school rules and regulations and also affront to public morality. Such folks cannot hide under the free expression of religion guaranteed by our Constitution because their actions would be implausible and extremely difficult to prove in law.

For instance, if some female students who want to send “mesh” hairstyle to Senior High School are denied admission, they would have to claim relevant fundamental human rights our Constitution guarantees. They could claim the constitutional rights to education and dignity, yet their claim to the right to free expression of religion would be much more persuasive to oppose the school’s use of Article 14(1)(e) which says, “Every person shall be entitled to his personal liberty and no person shall be deprived of his personal liberty except in the following cases and in accordance with procedure permitted by law: for the purpose of the education or welfare of a person who has not attained the age of eighteen years”.

And if they claim “all persons shall have the right to: freedom to practise any religion and to manifest such practice” in Article 21(1)(c) of the 1992 Constitution of Ghana for their braids, they would have to prove factually that those braids are a tenet of their religion or denomination.

And there is no known religion or church in Ghana that holds braids as a tenet. Dreadlocks are a tenet of the Rastafarian religion and that is an undeniable fact; the Rastafarian students adduced that in court and it was upheld.

They can sue their schools for the violation of their fundamental human rights and our courts may rule in their favour because the practices under consideration are clearly tenets of those two churches. And our Constitution guarantees the free expression of religion.

Also, I sincerely think most people have been hypocritical about this issue because Rastafarianism is not a Christian sect and is associated with marijuana. If the Rastafarian students had been Protestant Christians whose Christian beliefs were harshly suppressed, they would have attracted public sympathy from a large chunk of our populace professing to be Christians.

But we should not forget that we live in a secular and democratic society and democracy thrives in diversity of beliefs. Thus the court ruling is good for our democracy.

DISCLAIMER: The Views, Comments, Opinions, Contributions and Statements made by Readers and Contributors on this platform do not necessarily represent the views or policy of Multimedia Group Limited.
Tags:
Achimota School
Democracy
Rastafarian students