Adam Kwarasey proud to tell son about performance against Brazil 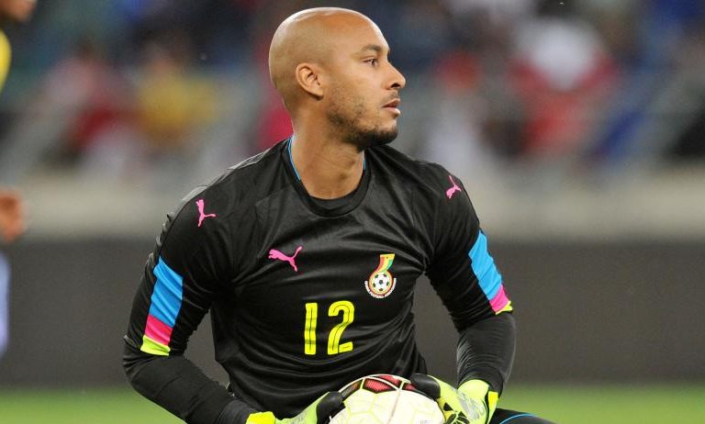 Former Black Stars goalkeeper, Adam Kwarasey, says he has good stories to tell his son from his spell with the Ghana national team.

Kwarasey, despite announcing his decision to play for Ghana in 2007, made his debut in 2012 against Swaziland in the qualifiers for the 2012 edition of the Africa Cup of Nations.

Speaking exclusively to JoySports, the shot-stopper talked about his impressive performance against Brazil in a friendly game in 2013.

“The Brazil game came a couple of days after and I think we were going to keep one half each and Richard got a minor injury during the warmup so they told me that I was going to keep the whole game. I don’t really remember what went through my mind – it’s just another game, just go and play. I felt like we didn’t have that much to lose, it’s a friendly game,” he said.

“I will say we did our job but 30 mins after we got the red card I got a little bit scared – like ‘this is going to be a long night’ but I think we did well as a team and also individually. It was just a good experience and it’s nice to tell my son I’ve played for the Black Stars for some years.

The now FC Oslo sporting director also added that he felt nothing special from that friendly even though Ghanaians were quick to heap praise on him.

“It was a good game but of course, people always talk about that game but it’s just a game and of course, a nice experience but you’re done with it,” he continued.

“The next game I played was 3/4 days after and I wasn’t that good in that game so you can’t really sit back and enjoy those moments for too long. You just need to move on but of course, a nice experience just like other games where I put on that jersey. I always felt proud when I played in that jersey.”

Kwarasey announced his retirement from football in 2020.

DISCLAIMER: The Views, Comments, Opinions, Contributions and Statements made by Readers and Contributors on this platform do not necessarily represent the views or policy of Multimedia Group Limited.
Tags:
Adam Kwarasey
Black Stars
Brazil