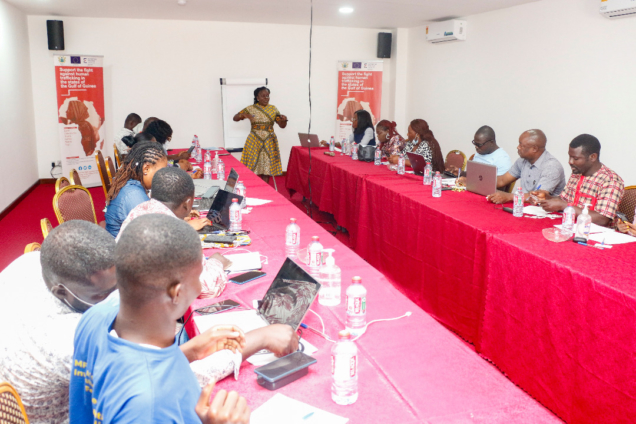 Advance media training for selected journalists from Nigeria and Ghana on human trafficking has ended in Accra with a call on journalists to have collaborative regional efforts to help in the fight against the phenomenon.

The workshop, which was organized by Expertise France and funded by the European Union, took the selected journalists through topics such as media coverage of migration based on international law and evidence, ILO media tool kits on labour and fair recruitment among others.

The facilitator, an international media consultant, Charles Autheman who took the participants through the training noted that there is an increase in human trafficking globally and it is often related to labour exploitation or commercial sexual exploitation.

He noted that the training was aimed at helping journalists with previous experience in human trafficking to expand their knowledge on current trends so as to help eradicate the menace.

Mr. Autheman said reporting on human trafficking is complex and quite a sensitive topic as it involves working with sources. There is therefore the need for journalists to be well-equipped to work in this area.

“Reporting complex issues related to the world of work, and one of them being human trafficking, which is often related to labour exploitation or commercial sexual exploitation,” Mr. Autheman said.

He urged the journalists to be strategic in their reportage on human trafficking, especially by focusing on some specific aspects of the issue because human trafficking takes different forms.

He also urged journalists to always advance their knowledge on the issue to enable them to report safely in a way that informs their audience.

“Some of the advice that I shared with them is that, while they need to prepare themselves, they need to really continue to advance their knowledge and be quite strategic in the sense that human trafficking takes a lot of different forms,” Mr. Autheman said.

Project Manager for Expertise France, Serge Akpaloo said Expertise France which is a French public agency had funding from the European Union to train the first batch of journalists on advanced training on human trafficking.

Mr. Akpaloo noted that the project was important to have journalists lead the fight against human trafficking and hence more journalists from other African countries would be trained in the coming months with funding from the European Union {EU].

Mr. Akpaloo hopes that with the just-ended training, journalists would be able to do more compelling reports on human trafficking and help in the fight against the menace.

According to him, journalists are in the process of forming a regional network across Africa to help them have collaborative efforts in fighting the canker.

“This project was able to happen with the help from the European Union for the first ever advance training for journalists from Ghana and Nigeria and we hope that the journalists will go back and focus on reports on the human trafficking,” Mr. Akpaloo said.

The Press Officer for the Nigerian National Agency for the Prohibition of Trafficking in Persons, Vincent Adekoye noted that the two countries have persons dedicated to fighting the menace hence the need for the training.

Mr. Adekoye said it is necessary for the journalists from both countries to have a synergy and work together by comparing notes and sharing experiences to deal with the issue.

According to him, effective collaboration between journalists would help in identifying and rescuing survivors of human trafficking.

He added that such collaboration would also enable the general public to have in-depth knowledge of the modern and dynamic ways of human trafficking in their respective countries.

Mr. Adekoye said globally, human trafficking remains a big canker with Africa being worse affected hence, the need for the media to help in the eradication of the menace by constantly putting a spotlight on it to get the maximum attention of governments

DISCLAIMER: The Views, Comments, Opinions, Contributions and Statements made by Readers and Contributors on this platform do not necessarily represent the views or policy of Multimedia Group Limited.
Tags:
Advance training
Expertise France
Human trafficking