Akufo-Addo cuts sod for dualisation of 2km road in Nandom 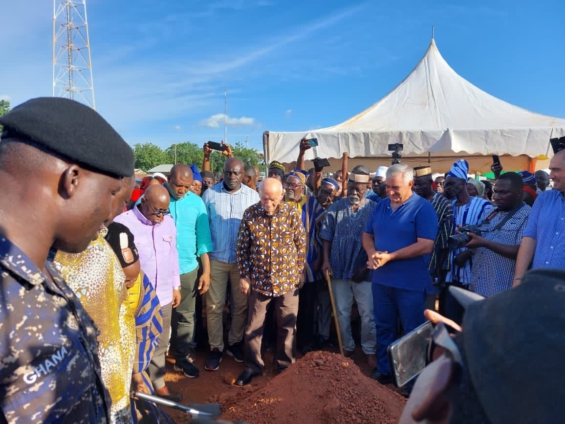 President Akufo-Addo has cut sod for the dualisation of Nandom Town roads in the Upper West Region.

The two-kilometre project will cost ¢85.2 million and will see the main streets of Nandom expanded with traffic lights, road markings and street lights

Addressing the Chiefs and people of Nandom on Monday to highlight his two-day working tour of the Upper West Region, the President assured them his government will construct more roads in the community and also make Nandom one of the sites for STEM School development with a boarding technical school.

“The desire for us to have a workforce that has hands-on education is one that I share 100% with you and that is why Nandom has been chosen as one of the sites for the STEM School development and very soon that matter will be fully up in progress.

“So the desire you are expressing to have a boarding technical school here in Nandom is going to be met. And in the same way, as the demand for the schools to be fenced, I believed there are advanced plans already in place for fencing the walls of the KOSEC and the middle school. So both of them very soon will have the fence wall that you are seeking,” he stated.

The President added that there are plans to open an Agricultural Development bank branch in the community and aside from that, a discussion with the Ghana Commercial Bank is underway to see whether there is a possibility to establish a branch in the area.

He further appealed to the civilians to corporate with the security agencies in supporting the “See Something Say Something” campaign to make sure that no penetration of Ghana takes place with terrorist infiltrators.

Minister for Roads and Highways, Kwasi Amoako-Attah, speaking at the event explained that the road from Nandom to Lambussie is 5.8 km and it is currently under procurement which is going to cost the government an amount of ¢30 million.

He said a contractor will be appointed and work will begin in less than two years’ time.

“The dualisation will be two kilometres, a two-lane dual carriageway of seven metres each and two metres raised walkway on both side. The road is going to be raised to asphaltic level. We are going to do all concrete works and other works along the stretch of these roads.

“We are going to provide all forms of road furniture along this stretch of the road, effective road signs and a roundabout with a signalised traffic light to promote safety and regulate the movement of vehicles” Amoako-Attah stressed.

The Information Minister, Kojo Oppong-Nkrumah, announced the next move will be to a town called Isa in the Upper West Region to inspect the progress of an ongoing Agenda 111 project.

He said the President would commission a solar power project that is set up at Nadowli Kaleo to add to the power needs of the country, then to Wechiau in the Wa West Constituency to visit another agenda 111 project.

The Minister mentioned that the final two day tour will end in Damongo, the capital of Savannah Region.

DISCLAIMER: The Views, Comments, Opinions, Contributions and Statements made by Readers and Contributors on this platform do not necessarily represent the views or policy of Multimedia Group Limited.
Tags:
Nandom
President Akufo-Addo
Upper West Region