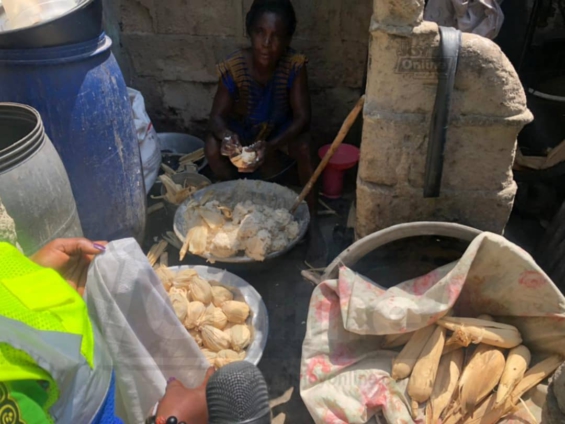 Several Kenkey vendors at Chorkor within the Ablekuma South Sub-Metro are in trouble after the Accra Metropolitan Assembly (AMA) officers stormed the area to inspect sanitary conditions.

It emerged that the meal is sometimes prepared under extremely unhygienic conditions.

A visit by the Joy Clean Ghana team to popular kenkey spots in Chorkor revealed swarms of flies on the uncovered fermented dough and utensils filled with dirty water and overtaken by remnants from previous cooking sessions.

The Head of the Public Health Unit at the AMA, Florence Kuukyi, was incensed by the scenes at some of the spots.

She ordered AMA officials who were on the grounds to confiscate the fermented dough and issued abatement notices to the erring vendors.

“They keep preparing the food at these unhygienic places and will come to sell at neat places. So if you don’t take care, you’ll think this is where they cook it, but that’s not it”, she said.

She continued, “we will not allow them to sell this food today. We are seizing it to send a strong signal to other vendors that they must make sure to sell the very best to the consumers”.

The popular meal is made from milled corn covered in the corn husk and red hot pepper with fish.

But the conditions under which the main delicacy of the community lying just some two hundred meters north of the Atlantic Ocean is prepared is presenting a public health threat.

She warned that people must be interested in where they get their Ga kenkey from.