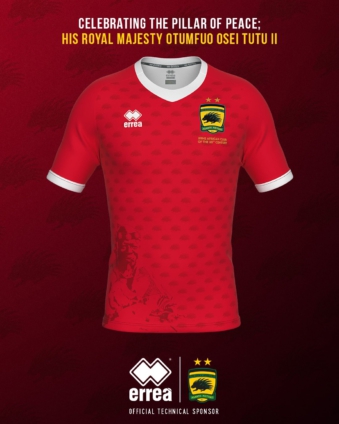 Ghana Premier League champions, Asante Kotoko, have unveiled their home and away kits for the 2022/23 season.

The inspiration behind next season’s jersey is to honour the club’s “pillar,” His Royal Majesty Otumfuo Osei Tutu II.

With a three-year deal already in place, Kotoko’s new kits were manufactured by Italian manufacturer, Errea.

The home uniform is mostly crimson with white trim around the sleeve and collar and has a stunning portrait of Otumfuo Osei Tutu II at the lower right of the jersey.

The club’s triumph in the CAF Champions League is indicated by the two stars that sit atop the famous emblem on the home jersey.

The away uniform also has a picture of Otumfuo Osei Tutu II embroidered in the lower right corner, with the neck region and sleeve borders being black and the primary colour being green, respectively.

The away kit has a distinctive crest of a Porcupine with the inscription “IFFHS African Club of the 20th Century” beneath it.

The Porcupine Warriors will have their pre-season in Turkey ahead of the upcoming season.