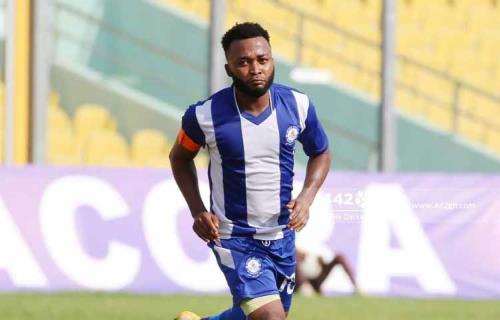 Hearts of Oak new signing Gladson Awako has called on supporters to lower their expectations ahead of the CAF Champions League campaign.

The Phobians completed the double in the just ended season after winning the Ghana Premier League and the MTN FA Cup – thus qualifying to represent the Ghana in the continental club competition.

The former Champions are back in the competition after six-year hiatus and ahead of the first assignment against Guinean side Industriel De Kamsar, the former Great Olympics talisman Awako explained why fans must have modest expectations of this squad .

“It’s good to be part of this competition, to take part in the Champions League. Yes the supporters and I know the club itself want to get to the top there, which we all know isn’t that easy. It’s been a very long time that Hearts has participated in such tournament, so I will plead with the supporters that they should calm down and support us.”

Awako who won the CAF champions league with Tp Mazembe in 2015, joined the Phobians from rivals Great Olympics in a move that topped the summer transfer charts in Ghana. Awako is confident the current squad has massive potential but called for caution in an exclusive interview with Joy Sports.

“They shouldn’t expect too much. We’ll do our best, we’ll do what we can to get to the money zone which won’t be easy but I know with the team, the management and support from the board chairman I know we’ll do our best to get to the money zone. So they shouldn’t expect too much that we’ll go and win the trophy. They should limit the expectation, which will take some pressure off the team.”

Find the full interview with Awako below: