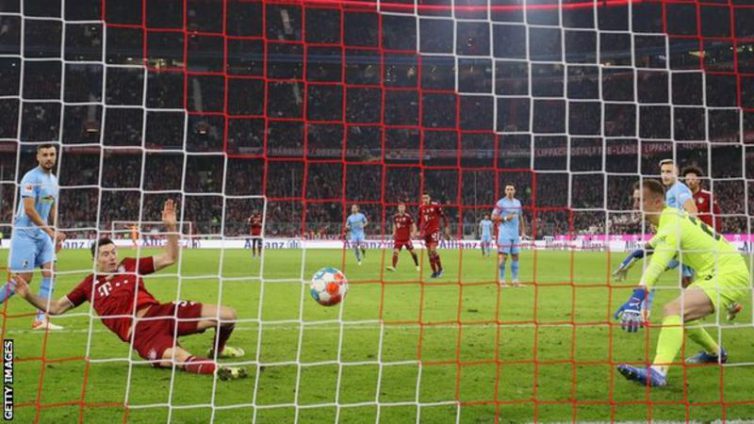 Bayern Munich became only the second team to score 100 Bundesliga goals in a calendar year as Robert Lewandowski’s 60th strike of 2021 helped them to victory over Freiburg.

Thomas Muller unselfishly set up Leon Goretzka for the opener.

Lewandowski wrapped up the win from close range after good play by Alphonso Davies.

Third-placed Freiburg, who had been unbeaten in the league, scored a late consolation through Janik Haberer.

Leaders Bayern have six Bundesliga games left before the winter break and only need one more goal to equal Cologne’s record of 101 Bundesliga goals in 1977.

Lewandowski’s 60 goals for Bayern and Poland in 2021 have come in only 50 games.

Bayern are four points above second-placed Borussia Dortmund, who lost 2-1 at RB Leipzig.

Christopher Nkunku gave Leipzig, who move up to fifth, the lead before Marco Reus levelled from Thomas Meunier’s through ball.

Yussuf Poulsen scored the winner for the hosts from Nkunku’s cross.