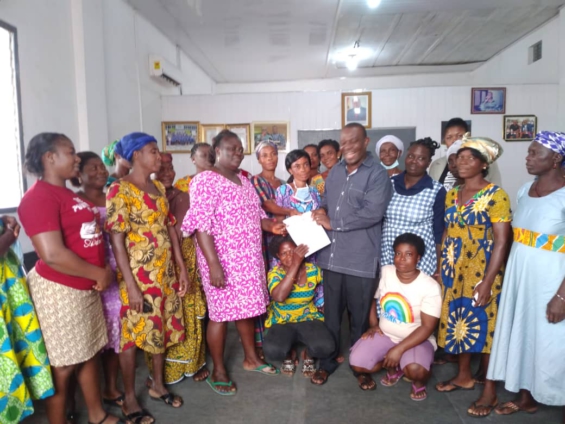 The Ho West MP, Emmanuel Kwasi Bedzrah, has presented a cheque of ¢10,000 to the Anyo Women Society.

This is to support the group invest in ventures they had earlier proposed to the lawmaker.

The presentation is also in fulfilment of the MP’s promise to support women in his constituency during the 2020 electioneering.

Mr Bedzra expressed excitement for being part of a life-changing process that will ultimately provide economic empowerment to women.

He, however, cautioned that the money was not to be shared and “chopped” as had been the practice in the past, where some people were only interested in immediate satisfaction, forgetting about investing to secure the future.

“You need to see this as an opportunity to invest in the future and not free money to be squandered today,” Mr Bedzrah emphasised.

The lawmaker also indicated that similar investment plans have been earmarked and will be rolled out across the entire constituency, focusing on women and youth groups.

He noted, “the biggest challenge facing our country today is youth unemployment, and it is not only an economic issue but also a national security threat for which reason I have decided to channel any available resources that come my way into these areas.”

Mr Bedzra also stressed that he was not demanding any interest payment from the group but insisted that they employ best practices in basic bookkeeping to ensure proper accountability, which will sustain their activities.

With this, he assured them of close monitoring and supervision to ensure that they remained on course.

A leader of the Anyo Women Society, Kafui Wariwa, expressed profound gratitude to Mr Bedzrah and pledged to put the money to judicious use to support themselves and serve as a model to similar groups.

They were thankful for the MP’s pieces of advice which they considered priceless and promised to utilize same in their endeavor.