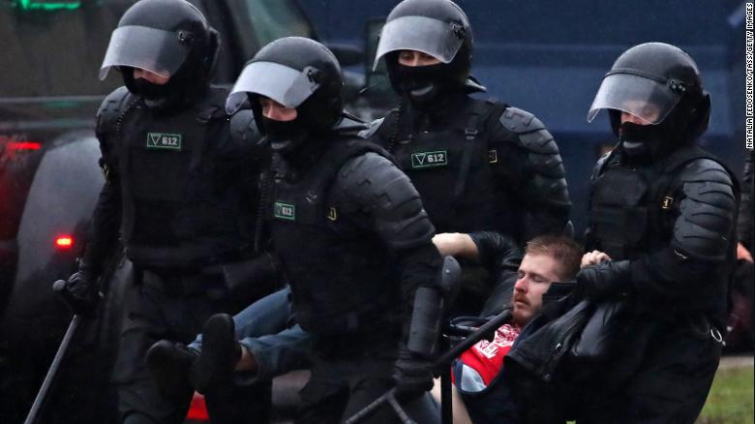 Belarus police can now use lethal weapons in the streets if needed, the interior ministry said on Monday, due to what it described as the radicalization of mass anti-government protests.

Security forces detained dozens of protesters on Sunday and used water cannon and batons to break up crowds demanding a new presidential election.

Footage published by local news outlets showed police officers wearing black balaclavas dragging protesters into unmarked black vans and beating protesters with their batons at a rally that drew thousands onto the streets of the capital, Minsk.

One sequence showed a police van unleashing a powerful jet of water from a cannon into crowds, visibly pushing them back.

Belarus, a former Soviet republic closely allied with Russia, has been rocked by street protests and strikes since authorities announced that veteran leader Alexander Lukashenko had won an August 9 vote by a landslide.

People have since taken to the streets every week to demand that Lukashenko step down and allow for a new election to be held.

Lukashenko, a former collective farm manager who has been in power since 1994, denies his win was the result of cheating.

Security forces have detained more than 13,000 people during a post-election crackdown, some of whom have been later freed.

Lukashenko’s key political opponents are either in jail or have fled abroad.

Sunday’s violence followed a meeting Lukashenko held on Saturday in a Minsk jail with detained opposition leaders, an unusual event that prompted some opposition activists to believe he was preparing to make concessions.

In a rare concession, two people who had taken part in the meeting with Lukashenko — businessman Yuri Voskresensky and Dmitry Rabtsevich, director of the Minsk office of PandaDoc software maker — were released late on Sunday, Belarus state television reported.

The United States, the European Union, Britain and Canada have imposed sanctions against a string of senior officials in Belarus accused of fraud and human rights abuses in the wake of the presidential election.

Lukashenko should be part of a new sanctions list by the European Union, Germany’s foreign minister Heiko Maas said on Monday before meeting his European counterparts in Luxembourg.

“We have to acknowledge that since our last meeting nothing has improved. The Lukashenko regime continues to exercise violence, we still see arrests of peaceful demonstrators,” Maas said. “I proposed to pave the way for another sanctions package, and Lukashenko should be one of the people on this sanctions list.”

Opposition leader Svetlana Tikhanovskaya, who is now based in Lithuania, has called for new elections and for all political prisoners to be freed.

“We will continue to march peacefully and persistently and demand what is ours: new free and transparent elections,” Tikhanovskaya wrote on her Telegram channel on Sunday.

Similar rallies were held in other cities across the country on Sunday.