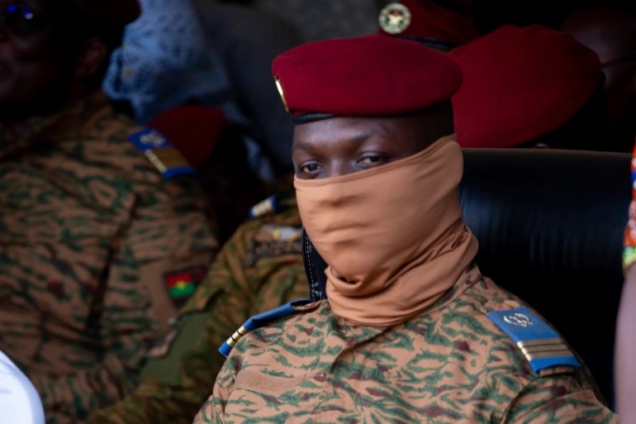 Captain Ibrahim Traore has been sworn in as interim president of Burkina Faso, several weeks after Paul-Henri Sandaogo Damiba was removed in a coup.

At a ceremony on Friday, Traore pledged support for a transition leading to elections in July 2024 as he took the oath of office in the capital Ouagadougou under tight security.

After taking the oath, Traore, dressed in military fatigues and a scarf with the country’s national colours, said: “We are confronted with a security and humanitarian crisis without precedent.

“Our aims are none other than the reconquest of territory occupied by these hordes of terrorists,” he added. “Burkina’s existence is in danger”.

Traore led disgruntled junior officers on September 30 in the second coup in eight months in the West African country.

The official investiture followed an announcement earlier this week by the constitutional council, which said the 34-year-old Traore had been designated as “president of the transition, head of state, supreme chief of the national armed forces” by a national meeting of the country’s forces.

In its statement on Wednesday, the council said it officially took note of Damiba’s “resignation” and “the vacancy of the presidency”.

Burkina Faso has witnessed political instability amid anger at failures to stem a seven-year armed uprising that has claimed thousands of lives and driven nearly two million people from their homes.

Sam Mednick, a journalist in Ouagadougou, told Al Jazeera that Traore had stressed in his speech that the existence of the country was in peril and that it was a priority to make the nation secure.

“Speaking to community leaders, soldiers and diplomats, they say he has many challenges ahead, one of them being that the army is not united,” Mednick said. “A lot of people still stand by his predecessor, Paul-Henri Sandaogo Damiba, who was ousted and is now in Togo.”

Damiba was removed from power due to his perceived inability to deal with a worsening armed uprising in the country.

“If Traore is not going to be able to show tangible progress quickly, people say he’s going to be ousted just like his predecessor,” Mednick said.

The Economic Community of West African States (ECOWAS) strongly condemned the coup, saying that it came at an “inopportune” time when progress was being made towards a return to constitutional order.

The United Nations on Thursday said the humanitarian situation in Burkina Faso has become so dire that some women and children have eaten only leaves and salt for weeks.

“Growing insecurity and blockades in many areas have left communities cut off from the rest of the country and facing growing hunger. Aid workers are struggling to reach these people who need assistance,” UN Under-Secretary-General for Humanitarian Affairs and Emergency Relief Coordinator Martin Griffiths said in a statement.

A quarter of Burkina Faso’s population – nearly five million people – is in need of emergency assistance, yet less than a third of the needed $805m for the country’s response plan is funded.

Attacks by armed groups, including some associated with al-Qaeda and ISIL (ISIS), increased in mid-March despite the military government’s pledge to make security its top priority.

In September, Damiba sacked his defence minister and assumed the role himself.

The struggle to contain rebel groups has prompted a series of coups in Mali, Guinea and Chad since 2020.

DISCLAIMER: The Views, Comments, Opinions, Contributions and Statements made by Readers and Contributors on this platform do not necessarily represent the views or policy of Multimedia Group Limited.
Tags:
Burkina Faso
Captain Ibrahim Traore
Coup leader
Interim president