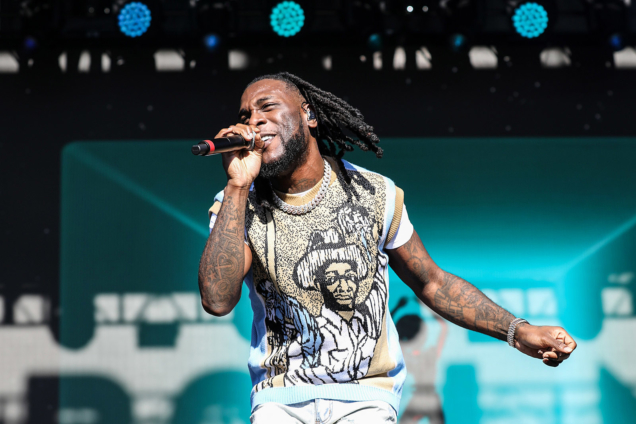 Burna Boy has once again proven why his nickname, the African Giant, is not merely for show.

Damini Ebunoluwa Ogulu, as he is known outside music circles, single-handedly held it down at the Madison Square Garden for over three hours on Thursday night.

Burna said, “let’s go deep” before performing bank on it. This song is really soothing to the soul. pic.twitter.com/tuKyjwYASD

The ‘One Night In Space’ concert saw the Grammy-award-winning artiste sell out the most famous arena in what has become a historic showdown.

Burna Boy becomes the only African to do so at the 20,789 capacity facility in New York.

The patrons in the arena were joined by over 80,000 others who streamed online via YouTube.

This comes after he recently toured Europe, selling out the 20,300 capacity Accor Arena in Paris twice, the 13,000 capacity 3Arena in Ireland, and the 9,500 capacity Geneva Arena in Switzerland.

His introduction by American musician Busta Rhymes was followed by a soulful opening by Senegalese singer and collaborator, Youssou N’Dour.

That is how Burna was ushered in as he treated the crowd to back-to-back hits together with his band The Outsiders.

Let’s just admit. #Burnaboy is on to something greater. This is just the opening act. Damn! 🔥#OneNightInSpace #BurnaAtMadison pic.twitter.com/aeLHgVSWzf

Prior to the show, questions were rife about when the African Giant was going to release his upcoming album.

He announced for the first time on the night that the project is scheduled to drop on July 2, 2022.

@thekendarko 🦍Burna Boy has just announced that his new album will be released on July 2, 2022.🗓He performed an unreleased song off the upcoming project for the first time at the #OneNightInSpace concert. #BurnaAtMadison #BurnaMSG ♬ original sound – TheKenDarko

Among the discography displayed on the night was Black Sherif’s Second Sermon Remix.

Here are highlights of the show as captured by social media users.

I am a hard-core @davido fan but I must commend @burnaboy for this massive win🏆. He’s worked so hard for this, with so much believe and self confidence.Honestly he deserves everything he is Today.
What an outstanding performance🦍🔥🔥🔥 #Burnaboy #BurnaAtMadison #30BG💪🏼 pic.twitter.com/p4pAxMEc1i

Any afrobeats artist that want to do a show in nyc #msg u have to come correct. Burna boy don raise bar. Lone wolf 🐺