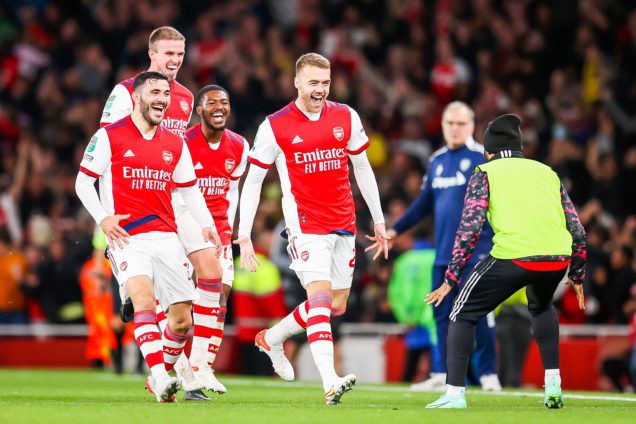 Substitute Calum Chambers scored within seconds of coming off the bench to help Arsenal see off Leeds United and reach the Carabao Cup quarter-finals.

Chambers’ header crept over the line for the opener 10 minutes after the break, before former Leeds loanee Eddie Nketiah pounced to wrap up the tie.

The forward cleverly flicked the ball over a stranded Illan Meslier and just did enough to nudge it over the line before the visiting keeper could recover.

Leeds had looked the more threatening side until the first goal in an open and entertaining game against a much-changed Arsenal side at Emirates Stadium.

But Mikel Arteta’s outfit were comfortable after establishing their lead as the visitors became stretched looking for a way back into the game.

Arsenal, hoping to win the competition for first time since 1993, will find out their last-eight opponents in Saturday’s draw.

VAR may not have been in use but Arsenal’s opener still felt like it took an age to register as all eyes were fixed on referee Andre Marriner to see whether the ball had crossed the line.

The official glanced at his watch, gave the signal that Chambers’ header had squeezed in despite the best efforts of goalkeeper Meslier and the hosts’ delayed celebrations began.

It was the substitute’s first touch of the ball, 23 seconds after entering the field, and he was only on the pitch because £50m defender Ben White had hobbled off moments earlier.

That will be a worry for Arteta, with White one of just two players to keep their place following Arsenal’s 3-1 win over Aston Villa last time out, the other being the lively Emile Smith Rowe.

The Arsenal boss called on those coming into the starting XI to use their minutes wisely and young forward Nketiah did that by continuing his prolific form in the competition.

The 22-year-old has struggled for first-team opportunities but grabbed his seventh goal in eight EFL Cup appearances, two of those coming while on loan at Leeds, when he reacted to a mix up in the visitors’ defence to score the second.

Arteta has already tasted success at Arsenal, winning the FA Cup as a player and coach, and the recent signs are encouraging for the Spaniard as his side made it eight games without defeat.

Leeds have not won away against Arsenal since 2003 at Highbury and that wait goes on, but they were buoyed by a vocal travelling support and enjoyed the best of the first half.

Gunners goalkeeper Bernd Leno had to get down quickly to palm Jack Harrison’s fierce half-volley away and Daniel James proved a constant threat, but Bielsa’s focus now returns to the Premier League and a trip to Norwich City on Sunday.