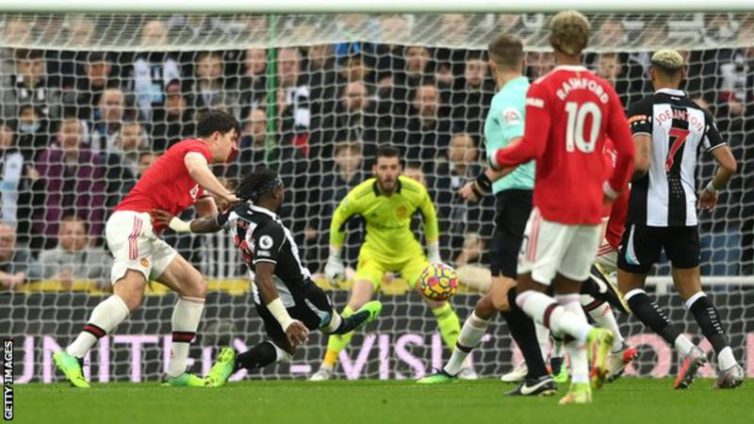 Since joining prior to the 2019-20 campaign, Allan Saint-Maximin is the only Newcastle player in double figures for goals (10) and assists (11) in the Premier League

Manchester United manager Ralf Rangnick admitted he “did not like the performance at all” after seeing his error-strewn side salvage a point at struggling Newcastle.

Edinson Cavani came off the bench to score a second-half equaliser following an at-times shambolically poor first half from the visitors, during which they conspired to partly gift Allan Saint-Maximin the opening goal.

For much of the game, an out-of-sorts Red Devils repeatedly relinquished possession, missed tackles, and failed to offer a sustained threat to a disciplined and determined home defence.

Cavani’s goal ensured Rangnick did not suffer a first loss as interim boss, but the point does not help them hugely in their quest for a top-four spot.

They have games in hand on those above them but are seven points behind fourth-placed Arsenal.

“Today we didn’t control the game apart from a few moments,” Rangnick told Sky Sports. “It’s all about energy, physicality and who wins the second balls. In all those areas we weren’t at our best.

“You have to be ready and able to win those direct duels and this was not that often the case. When we were in possession we had too many giveaways and even with the goal, that doesn’t make things easy.

“Our biggest problem was the mistakes we made. Even when we scored the equaliser we were not really controlling the game and taking the right decisions.

It was a cruel result on Newcastle, who defended superbly and counter-attacked with intensity to produce their finest display of the campaign.

Had Saint-Maximin followed up his superb first-half run and finish with cleaner contact on a shot from point-blank range soon after the break, or Jacob Murphy’s late effort found net instead of post, the home side would likely have the victory they deserved.

David de Gea must also take some credit courtesy of a number of superb saves, none better than the one-handed tip over to deny Miguel Almiron’s follow-up drive following the Murphy shot.

The point is scant reward for the Magpies and leaves them 19th on 11 points, two from safety but having played more games than all their rivals – and four more than Burnley in 18th.

To add to Newcastle’s sense of injustice they also lost influential forwards Saint-Maximin and Callum Wilson to injury during the game.

‘Newcastle can be a force to be reckoned with’

Newcastle played three times during Manchester United’s Covid-enforced 16-day sabbatical, losing each and conceding 11 goals in the process, albeit against some daunting opponents.

The doom-mongers will point to the continued poor results, the fact that the Magpies have now conceded a Premier League-record 80 league goals in this calendar year and the dropping of a league-high 19 points from winning positions this season as evidence of their fate.

But those with glasses still half full can now draw on a performance of grit and occasional guile that not only outstrips all others they have produced this season but belies their lowly spot in the table.

They did not defend like a side that has conceded 42 times this season, offering a disciplined structure that frustrated one of the most elite forward lines in the division, especially for the first hour.

In midfield they have the unlikely emergence of the box-to-box Joelinton, who won tackles, drove forward and played sensible, incisive passes all night.

Up top, Saint-Maximin and Wilson were a menace for the duration of their time on the pitch and will have every Newcastle fan crossing fingers that their injuries are not too serious.

Yes, it was another frustrating night for the division’s most high-profile strugglers, but also one from which they can draw much-needed optimism before a January transfer window in which they are sure to be busy.

“I can’t praise the players enough,” Newcastle boss Eddie Howe told BBC Sport. “It was an excellent performance. I’m really pleased. We deserved to win and you’re left with the horrible feeling of not getting what you deserve.

“We are capable of beating anybody. We proved that today. I thought we all performed today.

“That’s got the be the standard we’ve set ourselves. We can be a force to be reckoned with.”

Manchester United remain unbeaten under Rangnick, but this is one of few positives they can take from an evening full of defensive lapses, sloppy passes, weak shots and surly body language.

With their games at Brentford and at home to Brighton before Christmas both postponed by Covid cases that also saw the club’s training ground closed for a time, this was their first game in more than two weeks – but rustiness can only account for so much.

It was Rafael Varane’s hesitancy in the first half that allowed Sean Longstaff to nick the ball off him in a dangerous area to set up the opening goal, but the returning French centre-back was not alone with such calamitous play.

His partner Harry Maguire was, at times, like a bull in a china shop, ushering in panic wherever he wandered, with those further forward failing to provide that first line of defence Rangnick demands.

They improved in the second half, with Cavani the catalyst for earning a point, but his poacher’s finish was the one landed punch on an evening of tame jabs and ill-judged, wild haymakers.

They have games in hand to try and close the gap to the Champions League places, but Rangnick has much still to do if he is to narrow the gulf in attacking efficiency between themselves and those above them.

“We shouldn’t be looking for excuses,” Rangnick told BBC Sport. “We have to meet the demands in terms of speed, tempo, rhythm, transitions.

“We had chances to score but so did Newcastle. The good thing is we got the point after being 1-0 down but the performance has to get better.

“We still have steps to go. Today was not a step forward. We need to decrease the number of giveaways and unforced errors and those steps of development we need to take.

“We have to take it game by game. We have physical games coming up against Burnley and Wolves. Results are on track but we have to get better than what we showed today.”