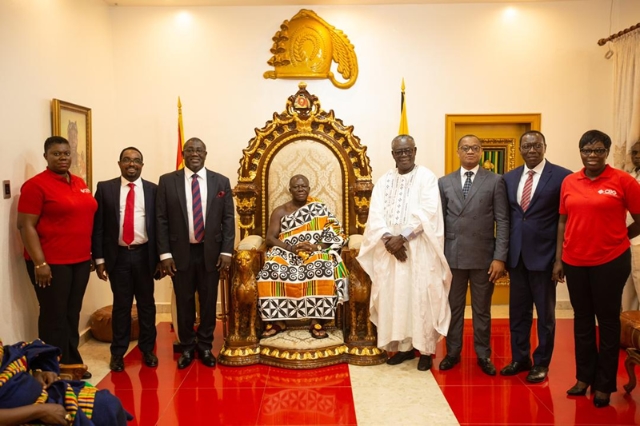 The Asantehene, Otumfour Osei Tutu II, has urged the leadership of Consolidated Bank Ghana (CBG) to roll out innovative products with the main target of growing the agriculture sector as a strategic way of boosting the national economy.

He said as an indigenous bank wholly owned by the government, it had a critical role to play in the growth of the sector which served as a source of livelihood for many Ghanaians and had been touted as the backbone of the economy over the years.

The King was worried that most banks were reluctant to support the sector which he believed had huge potential if proper mechanisms were put in place in the form of long-term investments by financial institutions.

He was addressing the board and management of the bank at the Manhyia Palace in Kumasi when they paid a courtesy call on him.

The CBG team led by its board chairman, Mr Welbeck Abra-Appiah was at the palace to seek the blessings of the King ahead of the opening of two new branches of the Bank at Asafo and Alabar and also pay homage to him as he marks 20 years on the golden stool.

Otumfour counselled the leadership of the bank to adopt best banking practices to justify the confidence reposed in them by the government and the central bank to protect the deposits of their customers.

They should think outside the box and manage the funds injected into the bank by government judiciously not only for the benefit of their customers but for the growth of the national economy.

Mr Welbeck Abra-Appiah, the Board Chairman of the bank, said due to the over-concentration of some branches of the seven banks that formed the CBG in particular locations, the bank had strategically closed down some branches.

He said the Ashanti Region had the highest number of branches with 22 out of the 90 branches across the country.

He pledged the commitment of the bank to work in the interest of the taxpayer whose funds was used to establish the bank and contribute meaningfully to the growth of the banking sector.

Mr Daniel Wilson Addo, the Managing Director of the Bank, said the bank would support Medium and Small-Scale Enterprises (MSE) which were mostly indigenous businesses.