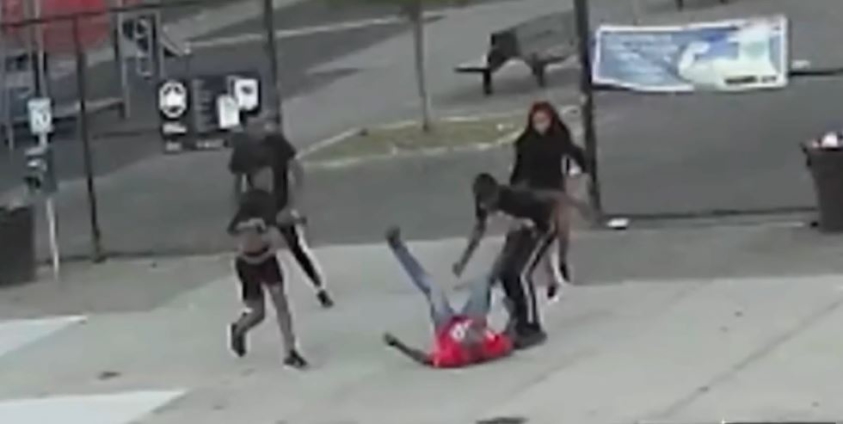 A disturbing footage about how the Ghanaian was beaten to death in the US has surfaced.

The 52-year-old taxi driver, Gyimah Kutin was jumped by five passengers who reportedly refused to pay the fare.

The incident which occurred in Queens in New York on Saturday, August 14, has triggered the arrest of three suspects.

While prosecution begins, the police has released new CCTV visuals detailing what happened on that day.

The video made public by the New York Police Department showed 2 males and 3 females attacking the driver on a pavement.

During the beatdown, one of the males slammed the driver with a heavy blow which caused Mr Kutin to the ground.

He seemed to have smashed his head against the ground and was rendered unconscious.

The footage forms part of attempts to identify the rest of the suspects.

The five subsequently left the scene but were seen in other footage entering the hallway of an apartment building in a bid to escape law enforcement.

Police responded to the scene and later sent him to a hospital, where he was pronounced dead.

While three of the suspects are facing charges, two other people, a 15-year-old girl known to the NYPD and a 13-year-old girl, are still being sought in connection with the attack, according to reports.

Meanwhile, Ghana’s Consul-General of New York, Daniel Kingsley Atta Boafo, says the arrest of the suspects is welcoming news to the Ghana Mission in the US.

“It is a great joy for the people of Ghana resident in the US and the Ghana Consulate of New York, the speed with which the US Police have been able to apprehend two of the perpetrators of the killing of the innocent Ghanaian taxi driver, Kutin Gyimah,” he said.

DISCLAIMER: The Views, Comments, Opinions, Contributions and Statements made by Readers and Contributors on this platform do not necessarily represent the views or policy of Multimedia Group Limited.
Tags:
CCTV
Ghanaian
Killed
Taxi driver
US