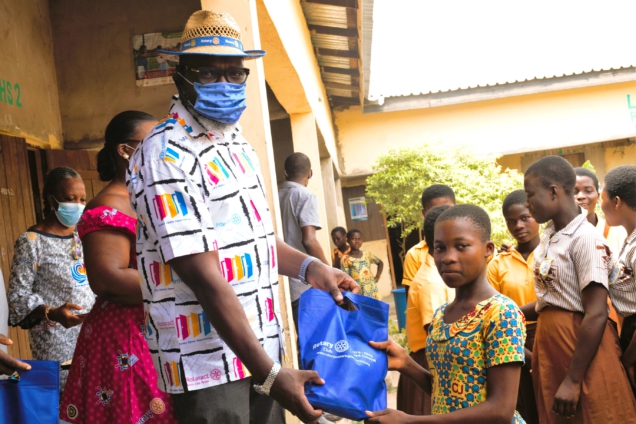 President Charles Okyere presenting a package to a student

He said this would reduce the financial burden on the young girls and encourage them to continue to attend school while menstruating.

He made the appeal when the Rotary club of Accra Ring -Road Central distributed reusable sanitary pads to young girls in some selected basic schools in the Shai Osodoku District of the Greater Accra Region. The distribution was part of Clubs Girl Child Menstrual Hygiene Project.

The donation was done in collaboration with ATeNaB Foundation and other stakeholders.

Mr Okyere said, “What we have observed is that, during your menstruation, your pads are expensive and sometimes becomes difficult for some of you to afford. This is what we want to avoid and prevent because we want you to have the opportunity to study hard and become better and responsible people in future.”

Every month, 1.8 billion women across the world menstruate.

The onset of menstruation means a new phase – and new vulnerabilities – in the lives of adolescents. Yet, many adolescent girls face stigma, harassment, and social exclusion during menstruation. As part of the donation, the students were educated on menstrual hygiene management by professionals from the Ghana Health Service.

Mr Okyere noted that in some rural areas, teenagers experienced some challenges during their menstruation which affected their health and academic status.

“In the deprived areas, when the young ladies are in their time of menstruation, it affects them academically because they are unable to go to school. When we asked which of them are menstruating, they couldn’t even respond because they were shy,” he said.

A member of the ATeNaB Foundation, Mr David Etsey urged teachers and parents to educate their wards on the importance of using reusable pads to encourage more girls to ensure good menstrual hygiene.

Headmaster of Lubuse DA Basic School, Mr Jonas Sackitey expressed appreciation to the Club and its partners for the love shown to them and encouraged them to continue with their good works.

He also appealed to other philanthropists to emulate the gesture and assist children in these vulnerable schools to have a better life.