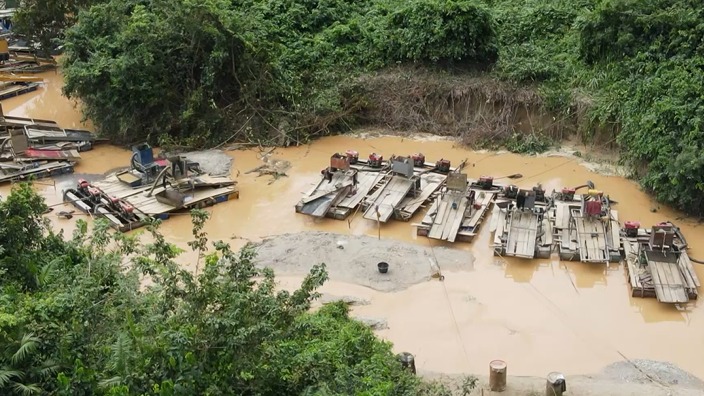 The Offin River is a clear water body that serves many domestic purposes for the people of Atwima.

But Galamsey operators perform their illegal activities on the river at Atwima Mponua and the borders of Mankranso in the Ashanti region.

Even after the arrest of 9 people by a joint Police and immigration team, a visit to portions of the lifeless-looking water source on Monday revealed severe pollution.

A bird’s eye view reveals a number of Chang fan operators working with impunity directly in the river at various portions of the highly-polluted resource.

According to a Luv FM report, at Kordjor Krom, some of the miners polluting the river escaped into the river at the sight of their team.

The residents are greatly distressed about the illegal activities of these miners in the river.

“The pollution of the Offin River has negatively impacted our farms, domestic animals and our livelihood. They have spoilt the water and the land.”

He further told Luv FM that, they’ve arrested the illegal miners but did not receive the support of local leaders.

“Before they went on the operation, we reported to the Assembly Man and the Youth Committee to give us one security personnel, as an escort to the operation site, but they did not adhere.

“We also informed the District Committee and the Police Commander about it, they didn’t also heed.”

He went on to say that “after we sacked the mining operators, they returned. They are still in the River Offin operating.”

Local leaders like Okyeame Agyenim Boateng of Beposo, deny knowledge of the problem.

“I have seen that things like that are going on but due to the Member of Parliament and me assigning people to destroy their equipment, I didn’t know they have started polluting the river again.

But DCE for Atwima Mponua, Kwame Marfo, who was scouting the area says he’s on top of his job.

“The police have arrested four miners and we have interrogated them. The water is getting clear now, just after visiting the site yesterday. We are still doing it, we will make it as it is. We will find an alternative way to halt the activities of these operators.

I have had conversations with the Regional Minister.

Now, the problem is being managed at the district level, if it is beyond our strength we will inform the Regional Minister, he assured.”