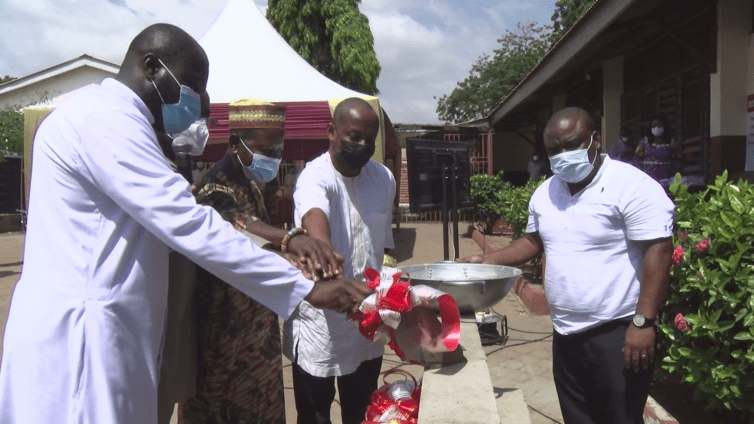 Christ the King International School, on Friday cut the sod for the redevelopment of the school which was founded on January 31, 1956.

This comes on the back of calls from Catholic expatriates working with various embassies and international outfits for a Catholic school to educate their children.

The school threw open its doors, only three months later, to Ghanaian children as well since some Ghanaian parents wanted their children to also benefit from a sound Catholic education.

Sixty-five years on, the needs of the school, as well as its population, have increased massively, with calls for expansion.

It is on the back of this that the Christ the King International School launched, on Friday, a ¢25.5 million project to redevelop the school and add even more infrastructure such as a state-of-the-art laboratory, library, teachers’ training centre, sports arena and more over the next few years.

The event was also to raise funds to start work on the multi-million project.

In attendance at the redevelopment and sod-cutting event were Most Reverend John Bonaventure Kwofie, Metropolitan Archbishop of Accra, Chairperson for the event, Mr Wyczynsky (Vish) Ashiagbor, Country Senior Partner for PricewaterhouseCoopers, Antonio Domingos KIAZO, Angolan Ambassador to Ghana, among other dignitaries.

Speaking at the event, the headmistress of the school, Veronica Laryea, spoke about the role the school has played in shaping some of the finest professionals and leaders the country has seen, but also highlighted the woes of the school which have necessitated the redevelopment project.

She indicated that, while the infrastructure of the school had been maintained very well, it was deteriorating and needed work to be done on it as quickly as possible.

The total redevelopment project is expected to cost GHS 25.5 million, with GHS 5 million needed for the completion of the first phase, which should be done in some 8 to 10 months.

Metropolitan Archbishop of Accra, Most Reverend John Bonaventure Kwofie, oversaw the blessing of the site while the cutting of sod for the commencement of work was performed by the Parish Priest, Reverend Dr Ebenezer Akesseh, together with Mr Wyczynsky (Vish) Ashiagbor, Country Senior Partner of PricewaterhouseCoopers, and Torgbui Atsuvi Srem II, Vice-Chairperson of the School’s Board of Directors.

The school is calling on all past students of the school, Catholics and well-meaning Ghanaians to lend their support to the project so the school can continue to deliver quality Christian education in Ghana – as it has done for 65 years already, shaping the lives of many professionals and leaders.

The Parish Priest, Reverend Dr Ebenezer Akesseh, together with the Chairman of the Technical Committee, Samuel Amegayibor, buttressed the call for past students and people of goodwill to aid the school.