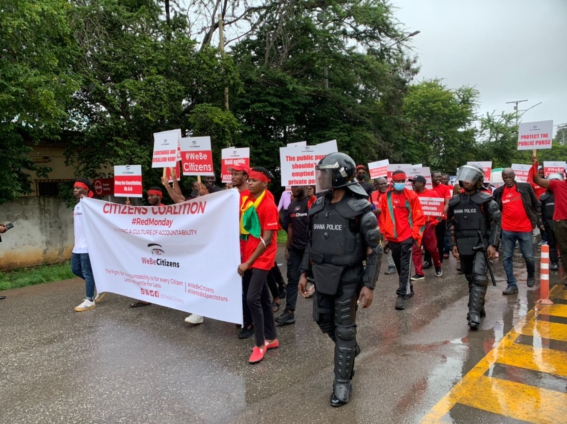 Representatives of civil society groups have hit the streets of Accra as they pile pressure on Auditor-General, Johnson Akuamoah Asiedu to exercise his powers of surcharge and disallowance.

Last week, the Audit Service’s latest report also disclosed that the country saw financial irregularities to the tune of ¢17 billion.

This was published in the Auditor General’s Report for 2021.

Although the revelation was shocking to many, Ghanaians are questioning why the Auditor General did not implement the initiative to surcharge institutions responsible for the lost revenue.

It is against this backdrop that the anti-graft campaigners have taken to the street today.

The Coalition for Democratic Accountability and Inclusive Governance otherwise known as Citizen Coalition has declared today as ‘Red Monday’.

In the morning, the ‘We Be Citizens’ protest hit a brief snag as protesters were being prevented from converging inside the Efua Sutherland Park.

Again, the rains also threatened to disrupt the intended demonstration.

DISCLAIMER: The Views, Comments, Opinions, Contributions and Statements made by Readers and Contributors on this platform do not necessarily represent the views or policy of Multimedia Group Limited.
Tags:
Auditor-General
Civil Society
Johnson Akuamoah Asiedu
Protest