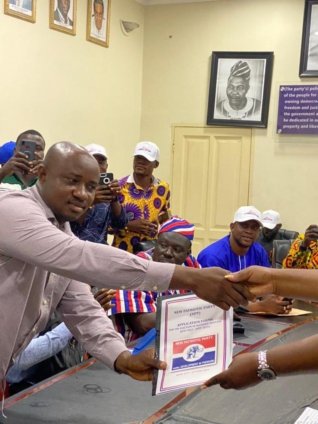 Coalition of Youth Organisers picked the forms on his behalf at the party National headquarters in Accra on Friday.

Wassa East Youth Organiser, Nana Beyin Franklin who led the team said and said Abanga is in the race to win.

He said the Youth Organisers numbering about 50 have all declared support for Abanga because he is down to earth and dedicated to the cause of NPP.

According to him, he has the ability, competence and commitment to lead the NPP youth wing to another victory in the 2024 election.

He said Abanga believes empowering the youth will make the country a better place hence his mantra, Obiaa bɛ didi.

“We have all benefited from the benevolence of Abanga that is why we are all supporting him. We believe he is the right man for the job” Franklin added.

The Wassa East NPP Youth leader indicated that, Abanga is coming on board with experience and fresh ideas to turn around the fortunes of the party.

Franklin added that, his love for the NPP earned him the name NPP Abanga, a name that has stayed till now.

The NPP will hold its national annual delegates conference at the Accra Sports Stadium from Friday, July 15 to July 17, 2022, and elect National Executive Officers of the party.

DISCLAIMER: The Views, Comments, Opinions, Contributions and Statements made by Readers and Contributors on this platform do not necessarily represent the views or policy of Multimedia Group Limited.
Tags:
NPP Abanga
NPP Primaries