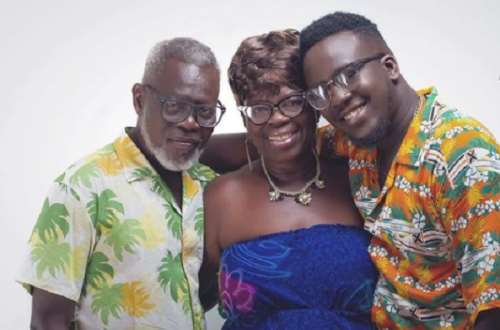 Ghanaian comedian, SDK, says comedy runs in his family as his parents found it very easy in to settle in his skits.

He made this known in an interview with Andy Dosty on Daybreak Hitz after he was asked how he went about convincing his mum and dad to feature in his skits.

According to him, the idea of featuring them came up after his quest for services of a female character for a role proved futile. He then spoke about it with his mum, who readily gave her a nod. Casting his mum turned out to be a great addition, as she executed her role perfectly.

“Whiles doing the videos, maybe I will need a female in it whereby I would have to wear wigs. But I didn’t like the idea so I told my mum to wear the wig so we shoot the video. So we did one and people liked it so I was like if so then let’s do more”, SDK revealed.

He further disclosed that getting his parents to feature was very easy, because they had always longed for a chance to showcase their talents.

Throwing more light on his claim, SDK said, “it wasn’t something I found difficult doing. They joined the very day I told them. My mum had always wanted to feature in Cantata sometime back and my dad used to do this pulpit thing in Sekondi-Takoradi so they gave in we started acting together right after”.

DISCLAIMER: The Views, Comments, Opinions, Contributions and Statements made by Readers and Contributors on this platform do not necessarily represent the views or policy of Multimedia Group Limited.
Tags:
Comedy
SDK