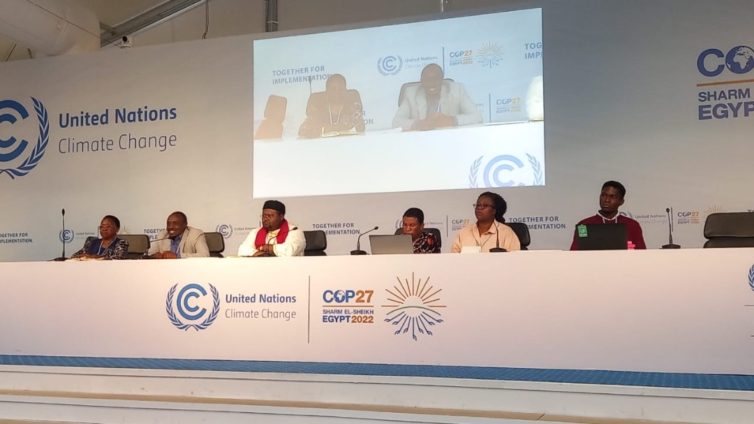 As they gathered for the international climate change talks in Sharma el-Sheikh, Egypt, known as the African COP, climate activists from the continent anticipated that delegations from the rich countries would make big decisions reflecting the scope and urgency of the climate catastrophe.

But even before it has concluded, African civil society organizations have expressed dissatisfaction with the progress and expected outcomes of the 27th Conference of Parties (COP27) of the UN Framework Convention on Climate Change (UNFCCC).

According to the CSOs under the Pan-African Climate Justice Alliance (PACJA), COP27 is coming to a conclusion, contrary to what Africa had anticipated, leaving millions of Africans in continuous climate-related agony.

“We came with the hope that the momentum created by the discussions in the year ahead of COP27 under the facilitation of UNFCCC, the COP Presidency and the facilitation of friends of the COP will materialize with concrete outcomes in Egypt. But unfortunately, the end of COP is an anticlimax,” said Mithika Mwenda, PACJA Executive Director.

He indicated that people facing starvation in the Eastern and Horn of Africa because of climate-related droughts, women in Nigeria drowning in floods and those buttered by the cyclones in Southern Africa would continue to wait for signals on action from the international community.

“This will continue to delay because decisions on loss and damage have been delayed yet again to 2024,” he said.

The lack of obvious connections between yearly plans, activities, and conversations from across continents but without tangible results at every other COP, according to Tracy Sony, a gender specialist from Botswana, is the most urgent cause for concern.

“Why should we be meeting every year in these COPs that end up with no substantial outcomes,” she said.

Where Africa feels let down
The African Group of Negotiators (AGN) has been urging developed countries to deliver on their commitment to meet the goal and ensure progression of efforts in the on-going mobilization of climate finance.

He has also indicated any slightest delay in adaptation action at scale means another set-back to Africa’s hard-won development gains and a stumbling block in Africa’s path to eradicate poverty.

Augustine Njamnshi, Chair Political and Technical Committee, PACJA, mentioned some areas where Africans felt let down by the COP27 and said that failure to acknowledge Africa’s unique needs and circumstances on the agenda of the COP27 contributed to the slow progress, delays, and, in some cases, the lowering of ambition on issues pertinent to Africa.

He pointed out that the COP27 has destroyed the dreams of the African people, potentially highlighting their situation, just as in Glasgow last year, which reduced the bar and delayed urgent actions despite the serious risk of missing the Paris Agreement targets.

“After a careful examination of what needs to change to rekindle hope and justify Africa’s continued engagement with the global effort to address the climate crisis, we call on African leaders to reassess the relevance of the UNFCCC and COP processes to the African people and take radical actions to strengthen Africa’s voice and participation,” said Njamnshi.

African women feel disappointed by the process and progress at COP27.

“The COP was tagged as an implementation COP with its promise on key African issues and had women excited since they are the major implementers of climate action at the grassroots,” Florence Kasule, a climate activist from Uganda said.

“However, women feel disappointed by the lack of action on adaptation, loss, and damage, which has meant little action on agriculture upon which the economies of African countries rely on and given that women drive agriculture”.

Young African climate activists who stressed the importance of climate justice for the continent’s 70% youth population attracted attention at COP27.

But Nigeria’s Lucky Abeng observed “Young people have been disadvantaged and look to next year with uncertainty. The COP27 progress has done nothing but punctured the pride of the African youth.”

UN Secretary-General outlines last-minute expectations
As COP27 draws to a close, the Mitigation work program is yet to reach the desired outcome; adaptation is still held back by procedural matters; ambitious outcomes on finance have not yet materialized; and on loss and damage, parties are shying away from taking the difficult political decisions.

In the last minutes of the negotiations, UN Secretary-General has been meeting with COP27 President Sameh Shoukry in Sharm-el-Sheikh.

António Guterres is worried parties remain divided on a number of significant issues as COP 27 draws to an end.

“There has been clearly, as in past times, a breakdown in trust between North and South, and between developed and emerging economies,” observed UN Secretary-General.

“This is no time for finger pointing. The blame game is a recipe for mutually assured destruction”.

He appealed to all parties to rise to “deliver the kind of meaningful climate action that people and planet so desperately need”.

The UN Secretary-General wants the parties to act in three critical areas.

First, the most effective way to rebuild trust is by finding an ambitious and credible agreement on loss and damage and financial support to developing countries.

“The time for talking on loss and damage finance is over. We need action,” he said. “We cannot continue to deny climate justice to those who have contributed least to the climate crisis and are getting hurt the most”.

Second, he wants all parties to forcefully address the huge emissions gap.

“Any hope of meeting the 1.5 target requires a step change in emissions reductions.

“We cannot close the emissions gap without an acceleration in the deployment of renewables. The Just Energy Transition Partnerships are important pathways to accelerate the phasing out of coal and the scaling up of renewables,” he said.

Third, the parties must act on the crucial question of finance, which is delivery of the $100 billion in climate finance for developing countries.

“It means acting on the consensus to reform multilateral development banks and international financial institutions. Their business model needs to change to accept more risk and to systematically leverage private finance for developing countries at reasonable cost for climate action.

“They must provide the support developing countries need to embark on a renewable energy and climate-resilient pathway,” he requested.

Leaders from around the world flocked to the COP venue to show their unwavering support for the international efforts to combat climate change and adapt to its effects, reaffirming their nations’ unwavering commitment and increased political will to the issue, and to make pledges and new commitments to strengthen the climate response.

“This political will needs to find its way fully to the negotiating rooms,” said COP27 President Sameh Shoukry.

“The world is waiting for us to demonstrate the seriousness by which we tackle this matter, and as a community of nations we must live up to their expectations”.

DISCLAIMER: The Views, Comments, Opinions, Contributions and Statements made by Readers and Contributors on this platform do not necessarily represent the views or policy of Multimedia Group Limited.
Tags:
2022 COP27
Climate Action
UN Secretary-General
UNFCCC