Coronavirus: One in five Americans ordered to stay at home 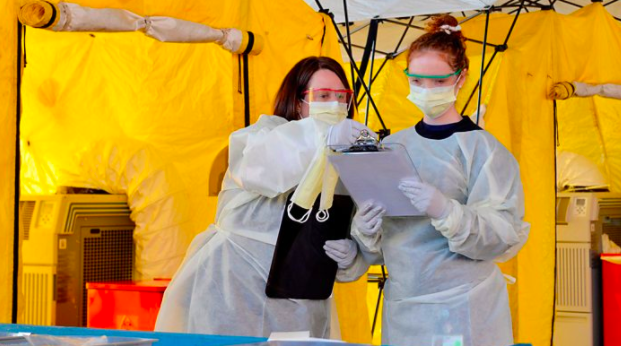 A number of US states have ordered shutdowns with one in five Americans soon set to be under a “stay at home” order.

Connecticut and New Jersey are joining Illinois and California in ordering residents to stay at home in order to combat the spread of coronavirus.

The virus has claimed nearly 230 lives in the US and infected more than 18,500 people.

Globally more than 270,000 patients have tested positive for the respiratory illness and more than 11,000 have died.

What measures are the states taking?

On Friday, Connecticut, Illinois and New York state announced measures directing tens of millions of people to stay at home. The restrictions order most workplaces to close and require residents to remain inside except for trips to grocery stores, pharmacies and gas stations.

In New York, Governor Andrew Cuomo restricted public gatherings and ordered all “non-essential workers” to stay at home. The measures come as confirmed coronavirus cases in New York reached 7,000 – the highest of any US state.

“These provisions will be enforced,” Mr Cuomo told reporters. “These are not helpful hints.”

Late on Friday, President Trump declared a major disaster in New York state, a move which will release federal funding.

New York and the neighbouring states of New Jersey, Connecticut and Pennsylvania also issued a joint order on Friday for the closure of all “personal care” businesses, such as hair and nail salons and piercing and tattoo parlours.

All outdoor team sports such as basketball games are also banned under the measures, which take effect on Sunday night.

The announcement comes after California Governor Gavin Newsom issued a similar order, telling all residents to stay at home. He estimated more than half of the 40 million people in his state would contract Covid-19 in just the next two months.

Images from Los Angeles show some of the city’s most famous landmarks completely deserted while the freeways are almost empty.

Illinois, whose biggest city is Chicago, has also ordered all residents indoors with exceptions to shop for food and medicine or take exercise.

Nevada announced its own ban on non-essential businesses on Tuesday. In Hawaii, bars and clubs have been ordered to close and social gatherings have been limited to groups of 10, according to the New York Times.

President Trump has so far ruled out any nationwide lockdown.

He said during a press conference on Friday: “I don’t think we’ll ever find (a US shutdown) necessary”. He added that the US was “winning” the war against the virus.

As both the number of cases and the global death toll continued to soar, many countries and regions took new measures on Friday, including:

These may be the most restrictive measures to be put in place in modern Californian history, but in Los Angeles life goes on and the streets are far from empty.

In a city famous for its gridlocked rush-hour traffic, cars are moving more freely past the palm trees on Sunset Boulevard. In Hollywood cyclists still overtake joggers and families still go out for a stroll. But these could all be seen as essential excursions.

People have been told that those who work in critical sectors should still go to work. Busses are still running and grocery stores, pharmacies and banks are all still open.

But many people are staying at home and friends and neighbours are keeping their distance. Restaurants and bars closed their doors days ago, but now all gatherings outside the home have been banned and there is no indication when the restrictions will be lifted.

Why has the US restricted border traffic with Mexico and Canada?

Also on Friday, the US suspended all non-essential traffic across its borders with both Mexico and Canada.

The curbs take effect at midnight on Saturday but will not affect trade, Secretary of State Mike Pompeo said.

President Donald Trump said on Friday: “In normal times, these massive flows [of immigrants] place a vast burden on our healthcare system, but during a global pandemic, they threaten to create a perfect storm that would spread the infection to our border agents, migrants and to the public at large.”

Hours after he spoke, the White House announced that a staff member in Vice-President Mike Pence’s office had tested positive for coronavirus, though a spokeswoman said the unnamed patient did not come into close contact with Mr Pence or Mr Trump.

Earlier this week President Trump announced that the border with Canada would be closed to non-essential traffic “by mutual consent”.

During Friday’s news conference, Mr Pompeo said the restrictions would take effect on Saturday and also apply to Mexico. They are due be in place for at least 30 days.

US citizens “should arrange immediate return” unless they intend to remain abroad for some time, Mr Pompeo said.

Acting Homeland Security Secretary Chad Wolf said the US was “working with both our Canadian partners as well as our Mexican partners”.

He added: “We want to make sure cargo continues, trade continues, healthcare workers continue to be able to traverse that border. But tourism, some recreational activities and other things need to stop during this crisis.”

The announcement comes as Canadian Prime Minister Justin Trudeau said asylum seekers crossing into the country on foot from the US would be turned back as part of the border shutdown.

How have the president’s businesses been affected?

According to US media, Mr Trump’s Mar-a-Lago golf club in Palm Beach, Florida, has closed following an order by the state’s governor to shut all bars and restaurants.

A spokesperson for the Trump Organization would not confirm the mothballing of the resort, but told CNN: “Various facilities are temporarily closed given local, state and federal mandates.

“We anxiously await the day when this pandemic is over and our world-class facilities can reopen.”

Mr Trump’s hotel in Las Vegas has already closed after coronavirus restrictions were introduced by the governor of Nevada.

The president’s hotels in New York and Washington DC remain open, though more than 200 staff have reportedly been laid off as their occupancy rate plunges amid the pandemic.

The bar and restaurant of the Trump International Hotel in the nation’s capital have shut in response to a virus-containment directive from the city authorities.