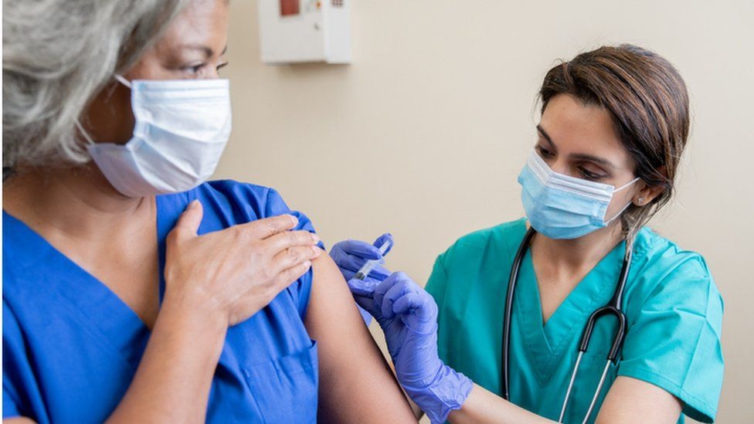 A UK trial has been launched to see if giving people different Covid vaccines for their first and second doses works as well as the current approach of using the same type of vaccine twice.

The idea is to provide more flexibility with vaccine rollout and help deal with any potential disruption to supplies.

The vaccines minister said no changes would be made to the UK’s current approach until at least the summer.

Currently, official guidance from the Joint Committee on Vaccination and Immunisation (JCVI) says anyone already given the Pfizer-BioNTech or Oxford-AstraZeneca jab as part of the UK’s approved immunisation programme should get the same vaccine for both doses.

In very rare circumstances a different vaccine can be used – if only one vaccine is available, or it’s not known which was given for the first dose.

The Com-Cov study, run by the National Immunisation Schedule Evaluation Consortium, will involve more than 800 volunteers over the age of 50 in England.

Some will receive the Oxford-AstraZeneca jab followed by the Pfizer-BioNTech vaccine or vice versa – four or 12 weeks apart.

Other vaccines may be added as they are approved by regulators.

Vaccines Minister Nadhim Zahawi said the government’s taskforce has given about £7m to fund the study, but that it will not share findings until the summer so “at the moment, we’re not changing anything at all”.

He told BBC Breakfast that mixing doses is “something that is done historically” with other vaccines such as jabs for hepatitis, polio, measles, mumps and rubella.

The chief investigator, Prof Matthew Snape from the University of Oxford, said the “tremendously exciting study” would provide information vital to the rollout of vaccines in the UK and globally.

He told BBC Radio 4’s Today programme that animal studies have shown “a better antibody response with a mixed schedule rather than the straight schedule” of vaccine doses.

“It will be really interesting to see if the different delivery methods actually could lead to an enhanced immune response [in humans], or at least a response that’s as good as giving the straight schedule of the same doses,” he said.

Scientists will monitor volunteers for side-effects and keep a close eye on blood tests to see how well their immune systems respond.

And although the full study will continue for 13 months, the scientists are hopeful of being able to announce some initial findings by this June.

The study will also provide data on:

And scientists say these could inform the type of vaccines some younger adults are offered as their second doses – as the vaccination rolls out to these age groups later in the year.

Prof Jonathan Van-Tam, England’s deputy chief medical officer, said: “Given the inevitable challenges of immunising large numbers of the population against Covid-19 and potential global supply constraints, there are definite advantages to having data that could support a more flexible immunisation programme, if needed and if approved by the medicines regulator.

“It is also even possible that by combining vaccines, the immune response could be enhanced giving even higher antibody levels that last longer. Unless this is evaluated in a clinical trial, we just won’t know.”

Any changes to the UK’s current strategy would need approval from the JCVI.

The study will be recruiting people aged 50 or older, who have not yet received a Covid vaccine, in these areas:

More than 10 million people in the UK have received at least one dose of a coronavirus vaccine, as part of the biggest inoculation programme the country has ever launched.

The government aims to offer first doses to 15 million people – those aged 70 and over, healthcare workers and people required to shield – by 15 February.

Mr Zahawi said after the mid-15 February target has been met, a detailed timeline will be set out for the next set of priority groups, including younger people with underlying health conditions and people aged 50 and over.