Did Messi really send his Barcelona transfer request by fax? 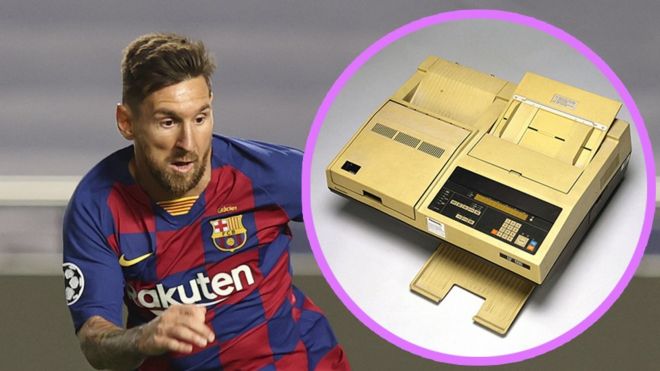 When Barcelona and general football legend Lionel Messi handed in his transfer request on Tuesday, the reaction was huge.

“Where will he go? How much will he cost?”

But it was the next line in the news story that really mattered: “The Argentina international, 33, sent a fax to the club on Tuesday saying he wishes to exercise a clause in his contract, allowing him to leave for free with immediate effect.”

Who even sends a FAX these days?
It’s 2020 Messi 📠 #MessiforEPL pic.twitter.com/JuoBVcs8gz

Messi shut down the internet with a message sent on a fax machine. If this doesn’t prove how big he is,idk what will.

Imagine writing an email by hand, then scanning it and feeding the sheet of paper into a kind of hybrid between a phone and a printer, for the recipient to print out before writing their reply.

If it sounds very old-fashioned, that’s because it is.

The idea was first patented by Scottish clockmaker Alexander Bain in 1843 – long before the telephone was invented.

He would swing a pendulum over a line drawing made of copper. Each time it hit a bit of copper, the pendulum would send an electrical signal to another pendulum, which would copy out the same image.

The copy was an exact replica of the original – a “facsimile”, or fax for short.

This was later adapted to send the electrical signals over telegraph wires (yep, the phone still hadn’t been invented) and the fax could be sent over long distances.

Fax machines have obviously moved on from pendulums and copper drawings – but the basic concept is the same.

Their heyday really started in the mid-1980s. (Around the same time Messi was born – coincidence?)

It was the era just before email got big and fax was the quickest way to send documents back and forth.

Papers, especially where a signature was required, were (and sometimes still are) faxed between businesses.

They were still being used well into the 2000s – and people still remember that painful squeal when they accidentally dialled a fax number instead of a phone number.Skip Youtube post by Jun Jia

It just refuses to die

Cassette tapes, VHS, Ataris – they were all big in the 80s, but they didn’t last long into the 21st century.

A BBC story from 2003 – when email was definitely a thing – explains how faxing was “more popular than it’s ever been”.

In fact, it goes on to say how it was common to print out an electronic document and fax it over to someone who would then type it up at their end.

And as recently as 2018, the NHS was banned from buying more faxes.

It came after a survey found they were still using about 9,000 fax machines across England to send things like patients’ medical histories.

The NHS was told to stop using them by March this year and move to email.

And fax’s time may be up for lawyers too. The electronic signature company DocuSign most recently reported annual revenue of $974m (£741m) – suggesting online signatures are big business.

OK, back to Messi, because there’s another bit to the story behind his so-called fax.

Many people online have been pointing out it probably wasn’t a fax in the old 80s sense of the word.

He sent a burofax – sort of like a recorded delivery in the UK.

It’s likely his lawyers would have sent a PDF through the Spanish postal service and FC Barcelona had to acknowledge that they’d received it.

In Spain, it means there’s legal proof of what was sent and on what date.

Which might come in handy if the dispute between Barca and Messi gets, well, messy.

But you never know – maybe Messi really was feeding his transfer request into an old fax machine from a multimillion-pound mansion last night?

As sportswriter Ryan Baldi points out, he was never one to do things by the book.