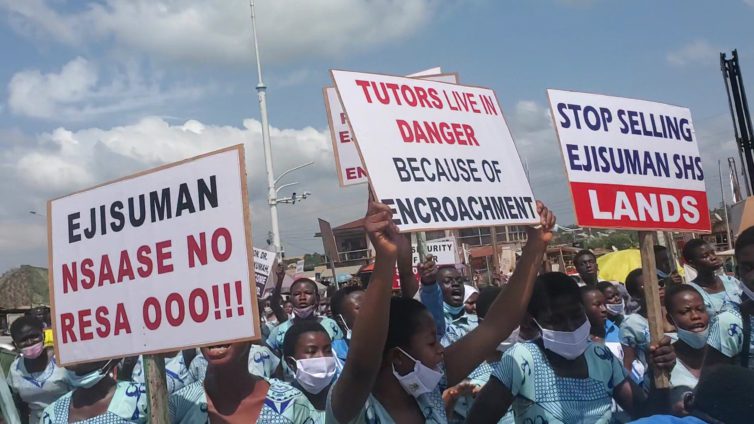 Authorities and students of Ejisuman Senior High school have embarked on a peaceful march over the encroachment of their school lands.

They alleged, portions of the lands belonging to the school have been sold to private investors without recourse to educational development.

Management of Ejisuman SHS says the encroachers have consumed close to half of the 120-acre land size allocated to the school.

Assistant Headmaster Administration, Daness Asimenu revealed that the investors have threatened to construct a road to demarcate the land.

“Encroachers have seized the lands belonging to Ejisuman. They told us it was the Omanhene who sold the land to them. They have even threatened us to construct a road separating certain teachers’ bungalows from the others where there will be the demarcation. And then, those bungalows that fall beyond this border will be taken over by them,” he said.

The encroachers are at various stages of building construction on the land.

Municipal Director of Education of Ejisu, Kwabena Wusu, received a petition from the school.

He assured the school of solutions to the challenge.

“We have taken lead to making sure the Regional Director hears of this, onwards to the Regional Minister. I believe you are going to do what is supposed to be done. I will make sure to pursue this case to its logical conclusion,” he said.

Municipal Chief Executive of Ejisu, Samuel Oduro Frimpong, also assured that due process will be followed to mitigate the concerns of the school.

“I will go through your petition, consult the various stakeholders and ensure that the land is protected. I will brief the Regional Minister and ensure that perpetrators are brought to book,” he said.

DISCLAIMER: The Views, Comments, Opinions, Contributions and Statements made by Readers and Contributors on this platform do not necessarily represent the views or policy of Multimedia Group Limited.
Tags:
Ejisu
Ejisuman SHS
Encroachment
Peace Walk