Ejura: Late Kaaka’s brother had no hand in his death – Grieving wife 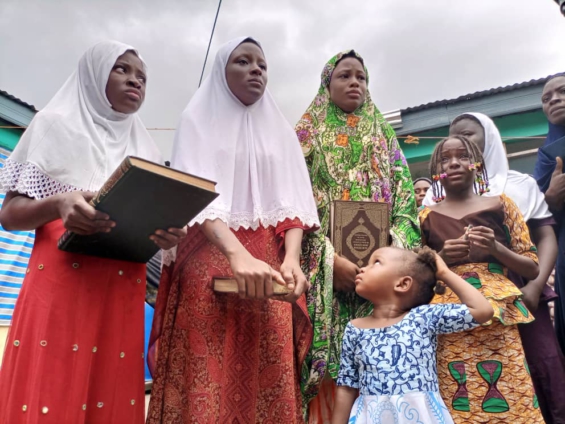 Wife of the late Kaaka, Sa’ada Hudu and her five children are refuting false allegations directed towards the brother of the late social media activist.

Her statement follows the arrest of the elder brother of Kaaka, Iddi, 28, by the Police. The Police said Iddi will assist them in investigations into the activist’s death.

The suspect will therefore be in custody at Asante Mampong Divisional Command while investigations continue, although his statement was taken at the Ejura Police station.

The family has since sworn publicly by the Holy Quran, to symbolise their strong conviction that Kaaka’s brother played no part in the death of the deceased.

According to the grieving family, the Ghana Police Service has arrested a wrong suspect who knows nothing regarding the death of his brother.

Choking with tears, Sa’ada Hudu said on that faithful day she saw two men around the neighbourhood who later engaged her husband.

This later turned into a hostile exchange, soon after which she saw the late Kaaka in a pool of blood

Meanwhile, Sa’ada Hudu has declared that her husband died a hero, who was fighting for the interest of the town of his birth.

According to her, she tried in vain to convince him to stop posting videos and photos of the insanitary conditions at Ejura on social media, yet Kaaka’s passion to see the change made her efforts fall on deaf ears.

“Kaaka told me about the threats he received from people and myself and his mother tried to convince him to stop. But he explained things to me and I supported him so I know he is at a better place,” a sorrowful Sa’ada said.

She appealed to the government to expedite action in dealing with the suspects who beat her husband to death and set free her in-law who is currently in police custody.

DISCLAIMER: The Views, Comments, Opinions, Contributions and Statements made by Readers and Contributors on this platform do not necessarily represent the views or policy of Multimedia Group Limited.
Tags:
Holy Quran
Ibrahim Kaaka Mohammed
Murder of Kaaka