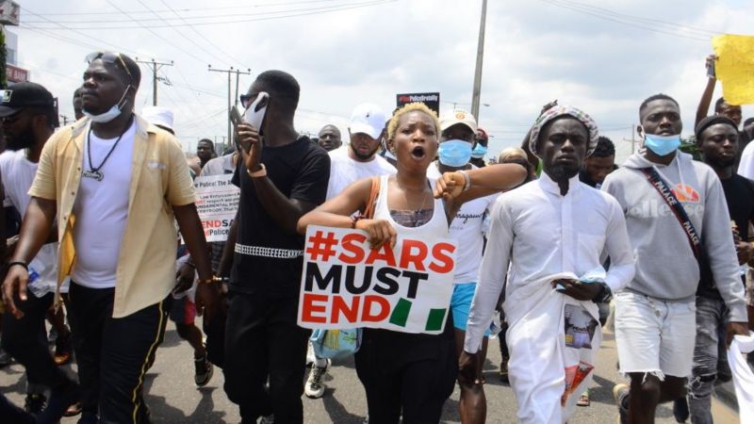 The Nigerian military has issued a warning to “subversive elements and trouble makers” to desist after a week of protests about police brutality.

Demonstrations against police brutality have taken place in cities across Nigeria in the past week.

The protests have continued despite authorities agreeing to disband the Special Anti-Robbery Squad (SARS).

The unit has been accused of extrajudicial killings, extortion and torture, especially of young people.

Protesters say that groups of men wielding machetes and other weapons have attacked them over the past two days, in both Abuja and the country’s biggest city, Lagos.

What did the army say?

Army spokesman Col. Sagir Musa said in a Facebook post: “The NA [Nigerian army] hereby warns all subversive elements and trouble makers to desist from such acts as it remains highly committed to defend the country and her democracy at all cost.”

He went on to offer to “support the civil authority in whatever capacity to maintain law and order and deal with any situation decisively”.

The statement has been received as a veiled threat by protesters, reports the BBC’s Chris Ewokor from Abuja.

Will the army step in?

If the president accepts the army’s offer to step in, it means the government hasn’t learnt from past mistakes – it would be trying to solve new problems with old solutions that never worked before.

The army coming in could make everything that has happened in the last week – with the deaths of at least 10 people caused by the protests, and the notoriety of the now disbanded Sars – look like child’s play.

The generation leading the protests has no experience of military rule – which ended in 1999 – and its brutal repressions of civil disobedience, so it’s hard to know how they will react.

But if there’s anything the last week has shown, it is that this group doesn’t give up easily.

Why are protests in Abuja banned?

The Minister of Nigeria’s Federal Capital Territory Administration says protesters have violated the public safety protocols on Covid-19 and so are endangering the lives of residents.

His spokesman, Abubakar Sani, told the BBC that the minister was concerned for public health and safety of the population.

He said that the authorities expected the protesters to comply with the ban, failing which security agents would be expected enforce their compliance.

One of the organisers of the protests in Abuja, Olumide Otitoju, said this kind of threat would not deter them from their peaceful protest to make their lawful demands as citizens.

What are the details of the attack on the protesters?

On Wednesday, protesters against police violence in Abuja were attacked by a group of unidentified men with machetes.

Witnesses said several hundred demonstrators were gathered in the city centre when the attack took place.

One protester said some of the assailants had later been detained and handed over to the authorities.

There are also reports of men with machetes turning up at a protest in Lagos on Thursday.

How did the protests start?

The protests started following the alleged killing of a young man by officers from the Sars unit at the beginning of October.

Protesters called for the unit to be disbanded.

The police closed it down and announced a new unit – the Special Weapons and Tactics (Swat) team.

But protesters rejected the announcement, as many see the changes as not enough to reform the police.

The protests have attracted worldwide attention – most recently the CEO of Twitter, Jack Dorsey, urged his followers to donate Bitcoin to the organisers.

Those working in Nigeria’s tech sector have been prominent among those complaining about the activities of Sars officers.

Nigeria superstars Wizkid and Davido have also backed the protesters.

What are the accusations against Sars?

From theft to violent attacks to murder, people have been sharing their experiences at the hands of Sars.

Obianuju Iloanya told BBC Newsday that her brother Chijioke disappeared eight years ago after being arrested by Sars officers.

The family was told by an officer he had been killed but were not shown his body.

The officers later denied arresting him.

“Up to now we don’t know whether he is alive or not,” Ms Iloanya said.

She told the BBC she had joined the protests to get justice for her brother.

“I do not just demand for Sars to be ended, I want accountability, I want justice. They cannot just tell us Sars has been ended. We want closure.”

“It’s painful, it’s not enough for us, it doesn’t do anything for us because these officers who might have killed these boys are going scot-free with no justice.”

What has the government done?

It has promised to meet several of the protesters’ demands.

The authorities have also vowed to free all those protesters who have been detained.

They say that all Sars officers will undergo a psychological and medical examination before further training and redeployment, and that Sars officers will not be redeployed to the unit set up to replace it, the Special Weapons and Tactics (Swat) team.

However, the protesters remain sceptical, pointing out that several previous pledges to abolish or reform Sars were not fulfilled.

DISCLAIMER: The Views, Comments, Opinions, Contributions and Statements made by Readers and Contributors on this platform do not necessarily represent the views or policy of Multimedia Group Limited.
Tags:
End Sars
Nigeria
Protests