Ensure justice before you call for peace-NDC 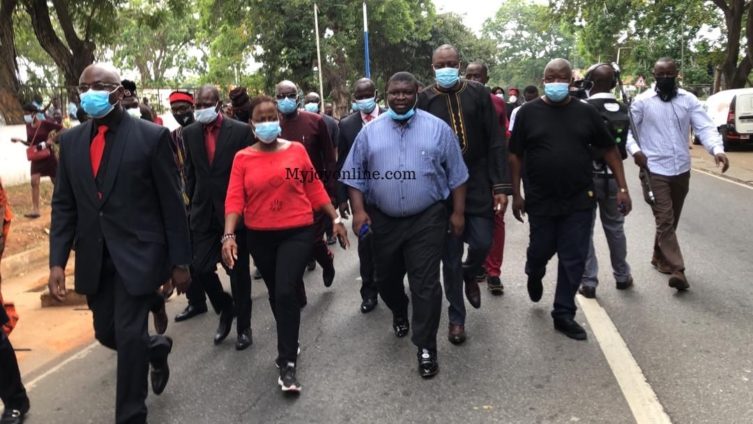 The Upper East Regional National Democratic Congress (NDC) has urged stakeholders demanding peace in the country to first ensure that justice prevails in the just-ended Presidential and Parliamentary elections.

The Party considers it “ridiculous” for anybody to call for peace without justice, and emphasized that the rank and file of the NDC in the Region stood by the decision of their Flagbearer, Mr John Dramani Mahama, and the National Executives not to accept the results of the elections.

“We will not concede until the Electoral Commission (EC) proves with evidence that John Dramani Mahama did not win the 2020 elections,” Mr Donatus Akamugri, the Upper East Regional Secretary of the Party told a crowd of NDC supporters at the Regional Office of the EC.

Leadership of the Party, former government appointees and Party supporters, clad in red and black, with placards, demonstrated through major streets of the Bolgatanga Municipality and burnt lorry tyres to protest the outcome of the 2020 elections.

Some of the messages on the placards read, “No Mahama, No Peace,” “2020 election is flawed,” “EC, our mandate is for JM not Akufo-Addo,” “EC must count my vote,” “Akufo-Addo stop shooting us,” “We voted for Mahama not Akufo-Addo,” among others.

According to Mr Akamugri, “It is a glaring fact that what Ghanaians witnessed in the just ended Presidential and Parliamentary elections in the country is the introduction of unfamiliar and treacherous democratic dispensation which has the tendency of plunging the country into chaotic environment.”

He said as a result of those “unacceptable democratic practices,” leadership of the Party in the Region was requesting all well-meaning Ghanaians and the international community to mount pressure on the EC to pay attention to the democratic tenets, and ensure justice through proper collation and declaration of election results of 2020.

“In the Upper East Region, the NDC had cause to hold two press conferences, one during the collation on 8th December, 2020 and another on 9th December 2020 on the figures churned out from media outlets.

Mr Akamugri said upon the declaration of the results, the “NDC painstakingly audited all the pink sheets in the various Constituencies and discovered more infractions in most Constituencies.

In the Navrongo Central Constituency for instance, the Secretary indicated that the NDC’s audited Presidential results captured 26,099 for the NDC and 15, 537 for the NPP, but the results certified by the EC put the scores as NDC 26, 099 and NPP 15, 587, an increment of 50 votes in favour of NPP.”

“This meant NDC lost 26 votes and NPP got an increment in votes as 46. In effect, NPP electoral fortune is appreciated by 72 votes. Other Constituencies such as Bawku Central and Bolga Central suffered similar fate,” he said.

The Secretary also recalled that some of their members suffered violent acts by some thugs, and alleged that during counting at the Yameriga electoral area, in the Talensi Constituency, heavily built persons believed to be NPP supporters with firearms assaulted their members.

“This case has been reported officially to the Ghana Police Service, and yet we are waiting to see what will happen,” Mr Akamugri said.

DISCLAIMER: The Views, Comments, Opinions, Contributions and Statements made by Readers and Contributors on this platform do not necessarily represent the views or policy of Multimedia Group Limited.
Tags:
Election HQ
John Dramani Mahama
National Democratic Congress