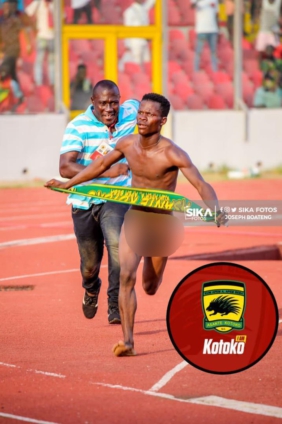 It was all joy for supporters of Krobea Asante Kotoko on Sunday, April 10, after the Porcupine Warriors beat Accra Hearts of Oak.

The Phobians lost by a goal to nil during the super clash at the Baba Yara Sports Stadium in Kumasi.

Franck Mbella Etouga scored the game’s only goal after Kotoko were awarded a controversial penalty for a foul on Fabio Gama.

Kotoko fans cheered and chanted loudly at the end of the game. But one man’s peculiar celebration stood out among the lot.

The unidentified male took his celebration a notch higher by jumping into the stadium while naked. It is unclear what time exactly he went nude.

The Kotoko fan, only holding paraphernalia of the club and letting everything hang loose, dashed around the stadium.

An official went after the excited fan and managed to grab him.

Meanwhile, Kotoko are now 16-points clear of Hearts to maintain their eight points lead at the top of the league table.