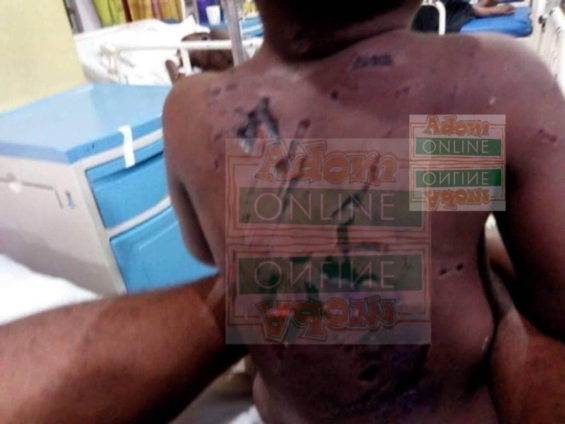 A father has disfigured the back of his three-year-old son for what police describe as “senseless and unwarranted” punishment for bedwetting.

The abuse has left the little boy in a critical condition at the Manhyia Hospital in Kumasi, police sources have confirmed.

The abuser, Ebenezer Nana Bonsu, who resides at Buokrom in the Ashanti Region was said to have perpetrated the act using naked wire and canes.

Frank explained that the boy did not stay with his father prior to being sent there recently by his mother for the child’s third birthday which fell on April 6.

He said the father prevented the boy’s mother from taking him back, only for them to learn of the ordeal later he was going through in his hands.

Frank said information available to his family suggests that Mr Bonsu physically abused the boy at the least provocation, at least for the one months that the child had been in his custody.

He said it was the constant abuse the boy was suffering that pushed a neighbour to report Mr Bonsu’s conduct to the boy’s mother.

“Prior to the ordeal suffered by the boy in the hands of his father last Saturday, we had already received reports from neighbours about how he constantly abused him.

On Saturday, it took the same neighbours to call us to rush down because Bonsu had resumed his abusive conduct, he explained.

When we asked about the child’s whereabouts from him on getting to the house, he told us he was sleeping only for us to find that the boy was badly hurt so we took him to the hospital.

He said the boy cried throughout their journey to the hospital as a result of the severe injuries suffered from the abuse.

The assault, Frank said, has left the boy with a swollen face and bruises all over his body.

The incident has since been reported to the police and father of the child has been picked up for questioning.