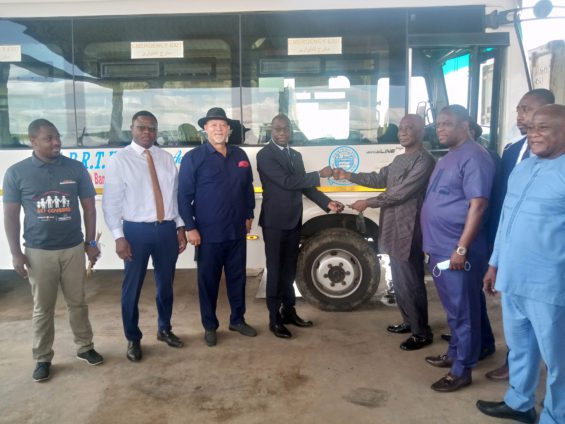 Fidelity Bank has handed over 10 new buses to the Greater Accra branch of the Ghana Private Road Transport Union (GPRTU) in a bid to improve passenger safety and comfort.

The partnership came about when the Union approached Svani Group to help it procure new buses with Fidelity providing $850,000 financial package.

At a handing over ceremony in Tema, Managing Director of Fidelity Bank, Julian Kingsley Opuni told Joy Business that transport plays an important role in the economy.

“So GPRTU has entered a financial commitment and will be using fares they receive to repay this loan. Transport and the ability to move from one place to the other is a key function of what drives the economy. This is at the heart of what Ghanaians do and we share in this,” he said.

Under this arrangement with Svani Group and financed by Fidelity Bank, Greater Accra regional branch of GPRTU will pay $850,000 for the 10  brand new 34-seater buses in the next five years.

Mr. Opuni tasked both GPRTU and passengers to take good care of the buses.

“For the drivers and owners, this is an asset you’re not just paying for, but also giving you additional livelihood over a longer period of time. To make that happen, it depends on the care you give the car,” he advised.

Beyond this venture, Fidelity Bank is also hoping to support the cash-lite digitalisation project government has embarked on.

“We will get to the point where we believe we can find digital way of collecting the fares and directly helping to pay for the buses going forward,” he said.

GPRTU National Chairman, Nana Nimako Bresiamah assured both Fidelity and Svani Group that the current leadership of the union will not repeat mistakes of past executives.

Being the largest transport union in the country, it is often criticised for compromising on safety and comfort of passengers with the use of rickety vehicles.

Public Relations Officer for GPRTU, Abbas Ibrahim Moro, was also optimistic results of such partnerships will give the Union a new face and promised to take good care of the buses.

GPRTU was thankful to both Fidelity and Svani Group for the partnership since it has struggled in the past to get financial support due to several demands from the banks.

Meanwhile, Chief Executive Officer of Svani Group, Thomas Svanikier has indicated that Eicher brand of buses is an Indian brand built to perform in Ghana’s terrain and has been on the market in the last 16 years.

He assured GPRTU that if Greater Accra branch is able to meet its financial obligations, this partnership will be extended to other regions to help develop a deep private sector participation in the motor industry.