Fifa suspension of Russia from "all international competitions imminent" - MyJoyOnline.com

Fifa suspension of Russia from “all international competitions imminent” 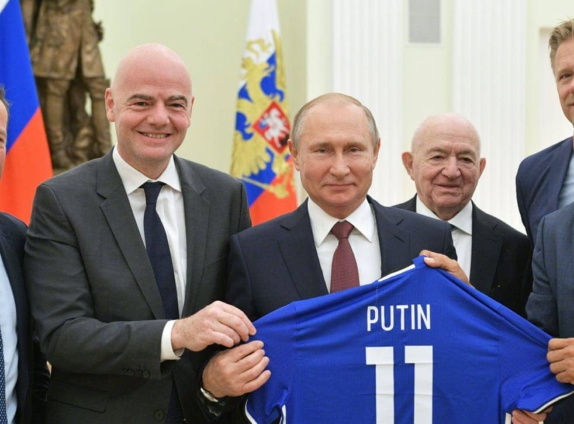 Russia will receive a suspension from all football-related activities following the country’s invasion of Ukraine, a senior Fifa official tells Joy Sports.

The decision could come as early as Tuesday.

Pressure has been mounting on football’s world governing body in recent days after several sporting counterparts – from Formula One, International Chess Federation, International Basketball, UEFA and others – took swift action to exclude Russia from partaking in or the hosting of any events for the foreseeable future.

Fifa’s response on Sunday was to ban Russia from hosting any international football games, but were still allowed to play on neutral territory without fans, a national flag and national anthem.

“The pressure has been substantial since [Sunday] and it is clear we have to do more than just this to allow Russia to play,” the official with knowledge of the matter told Joy Sports on Monday.

Fifa has been in constant communication with the International Olympic Committee, who have urged all global sporting associations to remove Russia outrightly from all events.

“Internally, there was not the will to suspend or ban Russia, although there was agreement that something should be done,” the official went on.

This would explain why the Fifa statement gave room for an exclusion of Russia from international football. Meanwhile, the IOC on Monday went one step further to call on all sports organisations to exclude not just Russia as a country, but all Russian and Belarussian athletes and officials from international competitions.

“The IOC EB (executive board) has, based on the exceptional circumstances of the situation and considering the extremely grave violation of the Olympic Truce and other violations of the Olympic Charter by the Russian government in the past, taken the decision to withdraw the Olympic Order from all persons who currently have an important function in the government of the Russian Federation,” read the statement.

It is yet to be seen how influential Russian footballers and clubs will react to this looming suspension, considering how damaging it could be to their careers following years of work to get as far as they have in World Cup qualification.

With all this international reaction happening, Russia continues its bombardment of Ukraine by air, land and sea. An earlier promise last Friday by top Russian officials to dialogue with Ukraine has since not happened.

It is expected that more sanctions, sporting and otherwise, will continue so long as Russia continues its actions against its neighbour.