French Open 2020: Petra Kvitova and Sofia Kenin through to semi-finals 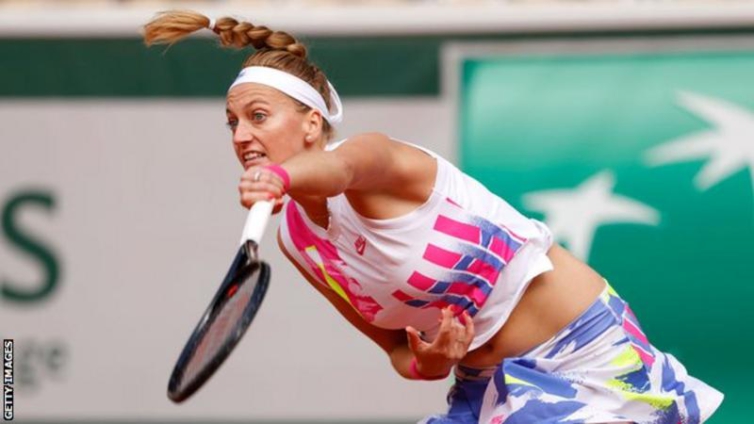 Petra Kvitova reached the French Open semi-finals for the first time since 2012 as an emotional run continued with victory over Germany’s Laura Siegemund.

The Czech seventh seed maintained her record of not dropping a set at Roland Garros this year with a 6-3 6-3 win.

Two-time Wimbledon champion Kvitova, 30, is bidding for a first Grand Slam title since returning from a career-threatening knife attack in 2016.

She will face American Sofia Kenin for a spot in Saturday’s final.

Collins claimed the second set but was broken to love in the opening game of the third and appeared to be struggling with an abdomen problem on Court Philippe Chatrier.

Kenin, the 21-year-old fourth seed, quickly dispatched of her opponent without losing a game in a 29-minute final set to reach the semi-finals in Paris for the first time.

“This is really special, I am super happy and really loving the French crowd here,” she said.

“I knew I needed to be aggressive myself and take my chances. I feel I did a great job overall. I am proud of myself.”

DISCLAIMER: The Views, Comments, Opinions, Contributions and Statements made by Readers and Contributors on this platform do not necessarily represent the views or policy of Multimedia Group Limited.
Tags:
French Open
Petra Kvitova
Sofia Kenin
Tennis