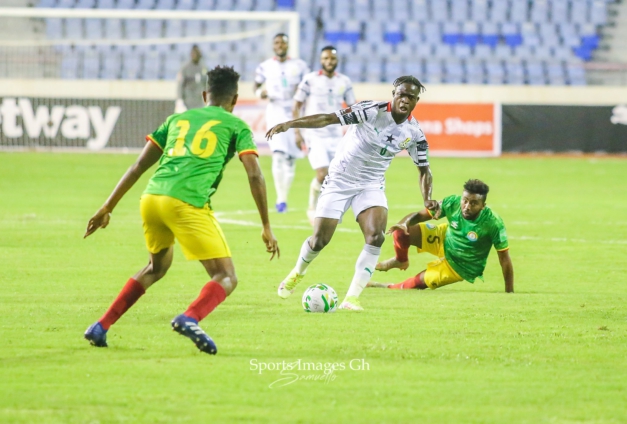 The Black Stars beat their Ethiopian counterparts at the Cape Coast stadium in Ghana’s first fixture for a 2022 World Cup berth.

Deep-lying midfielder, Mubarak Wakaso got Ghana’s only goal of the night, courtesy a goalkeeping error.

The Black Stars made a big deal out of an encounter many believed should have been a straightforward game for Charles Akonnor’s charges.

Irrespective of a performance which left much to be desired, the team got the victory and three points. Here are five things we learned from the encounter.

Akonnor has a lot of work on his hands

Ghana is ranked 52nd in the world and 8th on the African continent. As a result, facing Ethiopia who are sitting 150th in the global rankings and 44th in Africa on paper should have been an easy start for the Black Stars. Even on the field, the senior national team boasts of enough quality to see off this Ethiopian side.

However it was a very unimpressive display from the team, showing little to no flashes of collective brilliance. Bar the defence which was even quite shaky in the second half, every other facet of the senior national team failed to impress.

To make things worse, Ghana’s forward play was lethargic with forwards not doing enough to make the Black Stars comfortable. One of the biggest talking points about the senior national team since Akonnor took over has been the potency and quality of play in the forward lines of the national team, and this encounter did little to brush aside dire questions.

As already established, the Black Stars failed to flatter or impress. The team lacked cohesion in critical facets of the game, more importantly in midfield and attack. What stood out however was a trend established from Akonnor’s very first and previous games for the Black Stars.

Under the Ghanaian, the senior national team builds up via runs into channels and half-spaces from deep positions. Defenders look to feed wingers and deep-running midfielders, with long balls into half-spaces and channels during Ghana’s build up play, and that was a feature which trended through-out the game.

This looks to be one positive about Akonnor’s Black Stars – he’s been able to quickly pin an idea on his team.

The biggest positive from the night was Ghana’s ability to win the ball high up the field. The Black Stars defended in a 4-4-2, with Dede Ayew forming a sibling-strike pair.

The Black Stars looked to press the Ethiopians who were determined to hog the ball, high up the pitch. This proved effective for the team as it was an outlet through which Ghana managed to create some chances to trouble the Ethiopian backline.

Besides the identity in build-up, this was another positive from the game.

Need for a proper number 9 before AFCON

If there was anything going to be missed on the night, then it definitely was not going to be the big void in the Black Stars forward lines.

Since Akonnor took over the Black Stars head coach role, Jordan Ayew has been deployed as Ghana’s main striker, spearheading attacks. However as has been proven in all of the Black Stars’ games during Akonnor’s short tenure, the forward lines are highly ineffective.

If there is anything Jordan has not done, he has at least displayed that playing as a lone striker in a 4-2-3-1, is not an effective role for him or the team. Since Akonnor took over, only one striker – Ekuban has scored for the Black Stars from open play.

Jordan’s only goal came from a penalty in Ghana’s 3-1 victory over Sao-Tome and Principe.

Besides the inability to score, in situations where Ghana has needed a striker to occupy defenders and pose threats, Jordan is mostly roaming around looking for ball to feet – no fault of the player, it is just his style of play.

The need for a traditional number 9 is direr when the inability of the Black Stars to create a lot of chances is taken into consideration. So the team needs a striker who can turn half-chances into goals – Jordan does not seem that type of player.

Ghana did not suffer a lot in defence especially in the first half of the game where the duo of Amartey and Djiku marshalled Ghana’s defense very well. They managed to keep to a bare minimum the threat from Ethiopia’s intricate play from midfield.

This will come as a relief to a team which has struggled to find a working centre-back partnership for some years now. Going into the AFCON, should the duo maintain fitness, they will prove to be crucial to the run of the Black Stars.

The Black Stars will now travel to South Africa where a very difficult task awaits them. Akonnor will be without Amartey, Baba Rahman, Yiadom and other England-based players for the encounter, due to England’s travel restrictions.