Ghana card is being brandished as a political tool – Mahama 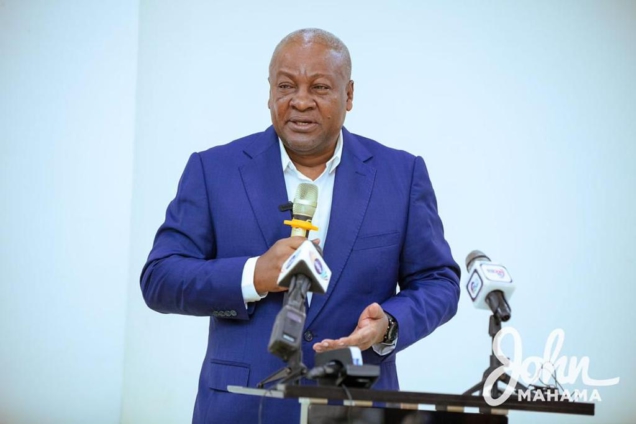 Former President, John Mahama says the Ghana card is being brandished as a political tool.

This, he said, is because there are indications for it to be used in the upcoming national elections.

“…the Electoral Commission, which instead of making it easy for our citizens to take part in elections, rather takes delight in making it difficult. They appear determined to ensure the disenfranchisement of sections of our population at all costs through a misguided insistence on the use of the Ghana card as the only source of identification for a voter card. How do you do this, knowing that the Ghana Card is not available to everyone who should have one?

The Ghana Card is a relatively new feature of our national life and has its merits in the scheme of things. At the moment, it is being brandished more as a political tool around which all manner of schemes is being fashioned towards elections,” Mr. Mahama said.

He advised that, “there is the need to allow sufficient time for its full integration into our way of life before this kind of unhelpful exclusion of all other legitimately acquired, credible and time-tested forms of identification is implemented.”

Speaking at the retreat for the Minority Group on Sunday, Mr. Mahama stated that “the haste on the part of the Electoral Commission to exclude all other means of identification is therefore clearly indecent and informed by an ulterior objective.”

He said although “The framers of the 1992 constitution intended that a number of these institutions complement the efforts of the Legislature at ensuring good governance, the style of the current administration, has been to subjugate and dominate these institutions for parochial and partisan gain.”

According to him, “These institutions have thus become pliant tools for the furtherance of the political ends of the New Patriotic Party (NPP) and President Akufo-Addo.”

Mr. Mahama said, “The National Identification Authority cannot claim to have covered every Ghanaian who should be registered or distributed all the cards printed to those who have been captured in their system. They have failed to distribute hundreds of thousands of cards to people who have registered.”

“Until full and total coverage is achieved in the roll out of the Ghana Card, room must be made for those who are yet to be served, to exercise their democratic rights of voting. They cannot be excluded from the voter register due to no fault of theirs. This should be clear and quite easy to appreciate,” he stressed.

DISCLAIMER: The Views, Comments, Opinions, Contributions and Statements made by Readers and Contributors on this platform do not necessarily represent the views or policy of Multimedia Group Limited.
Tags:
Electoral Commission (EC)
Ghanacard
John Mahama