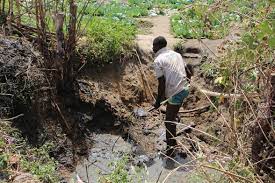 Deputy Director for Climate Vulnerabilities & Adaptation at the Environmental Protection Agency, Ghana has intimated that Ghana needs between $9 to $15 billion to roll out a 10-year plan to combat climate change and its associated dangers.

Speaking on the Super Morning Show on Monday, Dr Antwi-Boasiako Amoah explained that the climate action plan dubbed ‘Nationally Determined Contributions’ is part of the commitments to deal with the natural phenomenon.

During the show, Dr Antwi-Boasiako stated that the policy comprises investments in”renewable technologies in Ghana, forest productivity aimed at restoring the forest so that we restore our integrity of the land, investments in water resources, agriculture sector to build resilience in farmers, etc.”

“In the next 10 years, these strategies have been put together into a national action, coordinated by the Ministry of Environment and the EPA to combat climate change and its associated dangers,” he said.

What he, however said remained a challenge is financial support to ensure its smooth running.

“15% of the said amount is expected to be mobilised from the national resources, then the others are expected to come from other sources including international support,” he said.