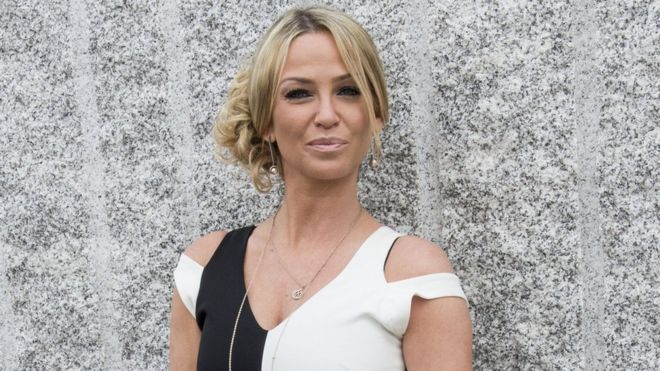 Girls Aloud singer Sarah Harding has been diagnosed with breast cancer, which she says has spread to other parts of her body.

Writing on Twitter, the 38-year-old told fans she was diagnosed with the disease earlier this year.

Harding explained she then received the “devastating news” this month that the cancer had spread.

“I’m currently undergoing weekly chemotherapy sessions and I am fighting as hard as I possibly can,” she said.

The singer, who was born in Ascot in Berkshire, also shared a photo of herself in hospital.

She thanked NHS staff, her family and friends for support, adding that she was “trying to keep positive”.

Harding said she had decided to go public with her diagnosis after being seen in hospital last week.

Her Girls Aloud bandmate Cheryl responded to the news by posting a broken heart emoji on Twitter.

Nadine Coyle commented on Harding’s Instagram: “I love you! You have always been able to achieve miracles when needed! I am here for all the way & always will be!”

I hope you are all keeping safe and well during these uncertain times. I’ve not posted on here for so long, thank you to everyone who has reached out to check in on me, it really does mean a lot.

I feel now is the right time to share what’s been going on.

There’s no easy way to say this and actually it doesn’t even feel real writing this, but here goes. Earlier this year I was diagnosed with breast cancer and a couple of weeks ago I received the devastating news that the cancer has advanced to other parts of my body.

I’m currently undergoing weekly chemotherapy sessions and I am fighting as hard as I possibly can.

I understand this might be shocking to read on social media and that really isn’t my intention.

But last week it was mentioned online that I had been seen in hospital, so I feel now is the time to let people know what’s going on and this is the best way I can think of to do so.

My amazing mum, family and close friends are helping me through this, and I want to say a thank you to the wonderful NHS doctors and nurses who have been and continue to be heroes.

I am doing my very best to keep positive and will keep you updated here with how I’m getting on.

In the meantime I hope you’ll all understand and respect my request for privacy during this difficult time. Sending you all so much love….xx

Harding shot to fame in 2002 as a contestant on Popstars: The Rivals – an ITV talent show which aimed to find both a new girl band and boy band.

She made it to the final and was voted into the group which became Girls Aloud, alongside Nicola Roberts, Nadine Coyle, Kimberley Walsh and Cheryl Tweedy.

The group went on to have several UK hits, including Sound of the Underground, The Promise, Love Machine, Jump and Call The Shots.

Girls Aloud reunited in 2012 after a short hiatus, to release and tour a greatest hits album. They announced their split in 2013.

Harding has since taken on several acting roles, including appearances in Run for Your Wife, and St. Trinian’s 2: The Legend of Fritton’s Gold.

She appeared on the Channel 4 reality show The Jump in 2016, but was forced to pull out after suffering a knee injury.