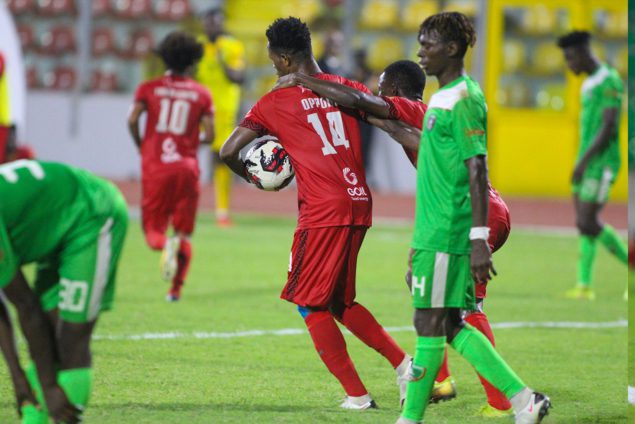 Asante Kotoko made it four wins out of four after comfortably brushing aside a flat Eleven Wonders side at the Baba Yara Sports stadium on Saturday.

Samuel Boateng gave the Porcupines the lead in the first half after latching onto a through ball from Salifu Mudasiru before drilling a low effort past Abdulai Ibrahim.

The Reds sealed the victory after Isaac Oppong scored from an acute angle to increase his season tally to three so far.

The result extends Kotoko’s lead at the top to three points as they remain the only side with a 100% record in the Ghana Premier League.

Newly promoted side, Accra Lions picked up their first three points of the season in a home game against Bechem United.

The Accra-based side raced into a two-goal lead in the first half thanks to Christopher Acheampong and Rauf Salifu.

Former Kotoko forward Augustine Okrah pulled one goal back for Bechem but it proved to be a consolation.

The win sends Accra Lions into the top 10 of the standings as Bechem remain 4th.

On Friday, King Faisal lost their first game of the season after Berekum Chelsea beat them 1-0 thanks to a goal from Paul Atta Agyei.

DISCLAIMER: The Views, Comments, Opinions, Contributions and Statements made by Readers and Contributors on this platform do not necessarily represent the views or policy of Multimedia Group Limited.
Tags:
Accra Lions
Asante Kotoko
King Faisal