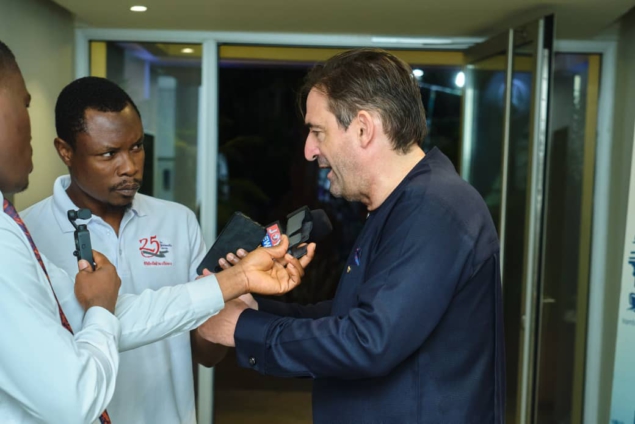 German Ambassador to Ghana, Daniel Krull, has described the widespread devastation of Ghana’s environment by activities of illegal miners as horrible and terrible, with a long term adverse impact on the country.

He has therefore called on Ghanaian authorities to as a matter of urgency take practical steps to prevent further damage to the environment by stemming out the illegal mining enterprise.

In an interview with Latif Iddrisu on the sideline of an event to mark the 32nd anniversary of the reunification of Germany, Ambassador Daniel Krull urged government to ensure every ounce of gold mined in Ghana is properly accounted for.

“It is terrible to see the daily reports about the negative impact of illegal mining to the water resources of the country. It is horrible’’.

Some local chiefs, politicians, business men and women and some foreigners have been accused of engaging in the illegal mining enterprise which is responsible for the widespread devastation of the country’s water bodies and forest reserves.

There’ve been reports about significant shortfalls in the quantity of gold declared by miners to Ghanaian authorities and the ounce of gold that ends up on the international gold market from Ghana.

That underhand dealing has over the years proven to be a loophole used by some miners to evade tax.

Addressing the phenomenon, the Ambassador said, ‘’Ghana is one of the most important gold exporters and we all know that a large part of it is illegal and is illegally exported without paying any taxes, and that is an important source of revenue for the government that is missing.”

Ambassador Krull went further to say that the German government will not abandon Ghana at this difficult period.

The European country according to the Ambassador will this time round demand a lot more of accountability from the government of Ghana.

“We are supporting Ghana so we want to ensure that Ghana is doing all it takes to secure their revenue, and this is to broaden the tax base. Ghana is one of the countries with the lowest tax to GDP all over Africa, so something has to be done. And if we are asked for budget support we say, well what are you doing to make sure that all the gold exports are properly processed and taxed’’.

Present at the 32nd anniversary of the reunification of Germany at the residence of the Ambassador were Germans living in Ghana and a cross section of Ghanaians.

DISCLAIMER: The Views, Comments, Opinions, Contributions and Statements made by Readers and Contributors on this platform do not necessarily represent the views or policy of Multimedia Group Limited.
Tags:
Daniel Krull
Galamsey