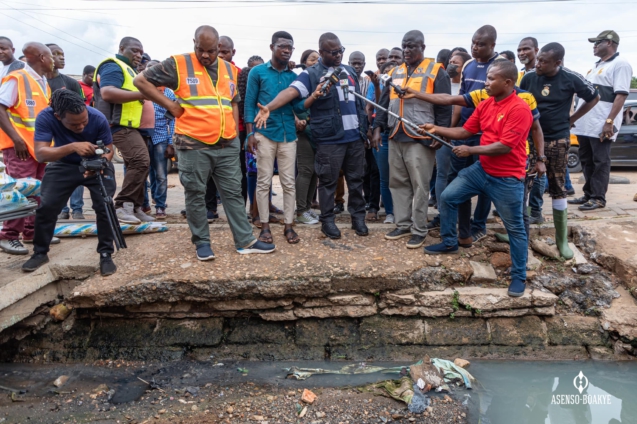 The Works and Housing Minister, has toured some areas in Accra and Tema that experienced flooding as a result of the heavy downpour over the weekend.

Mr. Francis Asenso-Boakye was accompanied on the tour on Sunday, May 22, by officials from the Ministry, the Hydrological Services Department, and the National Disaster Management Organisation (NADMO).

The purpose of the visit by the Minister was to ascertain the cause and impact of the flooding and to commiserate with the affected persons.

He observed that, “areas that had benefited from the construction of major drains and other flood control measures under government’s National Flood Control Programme (NFCP) did not suffer the adverse impact of the floods.”

The Minister noted that the government has invested over, GH¢450 million in the National Flood Control Programme alone over the past few years and that has culminated in the reduced incidence of flooding, particularly in major flood-prone areas in Accra.

He further added that the government is collaborating with the World Bank to invest another $200 million dollars in the Greater Accra Resilient and Integrated Development Project to tackle the perennial flooding challenge in the Odaw Drainage Basin as part of flood control measures across the country.

Mr. Francis Asenso-Boakye urged residents to support the efforts of the government by maintaining proper solid waste practices and desist from indiscriminate dumping of solid waste and building in waterways. “The fight against floods is a shared responsibility”, he stated.

The Minister also reminded Metropolitan, Municipal, and District Assemblies (MMDAs) to strictly enforce relevant laws to deter citizens from building in waterways and other unauthorized places. He further urged them to take steps to remove developments obstructing the free flow of water to reduce the risk of flooding.