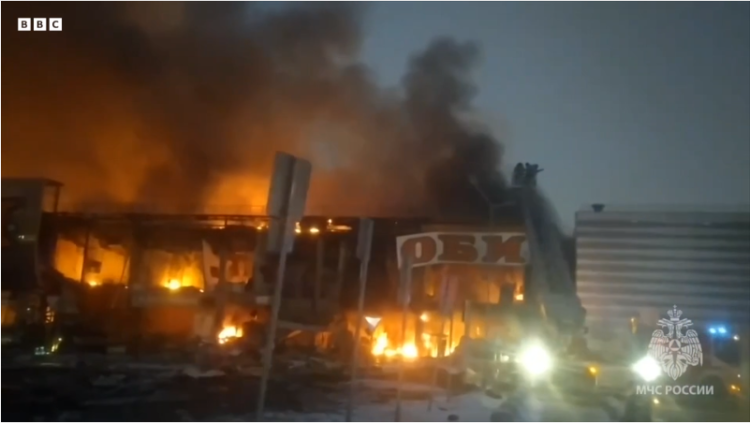 A huge fire has ripped through a major shopping complex on the edge of Moscow killing at least one person, Russia’s Emergencies Ministry has said.

Video of the blaze showed explosions at the massive Mega Khimki mall.

Arson is being investigated as a possible cause of the fire, but an electrical fault is thought to be a more likely trigger.

The centre had housed major Western retail outlets, until they pulled out after February’s invasion of Ukraine.

The fire spread across the roof of the OBI superstore at the complex early on Thursday morning, and at one point covered 18,000 sq m (194,000 sq ft).

Two hours later, an Emergencies Ministry official said what he described as the “open fire” had been put out.

At least one explosion at OBI, which sells home and garden improvement wares, caused the structure to start collapsing, firefighters said.

The blasts are thought to have been caused by exploding aerosols and paint tins.

Russia’s Investigative Committee has opened a criminal case into the incident. Losses from the fire have been estimated at $320m-$480m (£261m-£390m).

The German hardware chain OBI no longer owns the store, having sold all its Russian outlets – including 27 superstores – over the summer.

A 60% stake was bought by Russian-born German-Israeli businessman Josef Liokumovich for just $10 (£8).

DISCLAIMER: The Views, Comments, Opinions, Contributions and Statements made by Readers and Contributors on this platform do not necessarily represent the views or policy of Multimedia Group Limited.
Tags:
Fire Outbreak
Russia
Shopping mall