I was praising Sarkodie in Eno Barony’s ‘The Finish Line’ – Amerado - MyJoyOnline.com 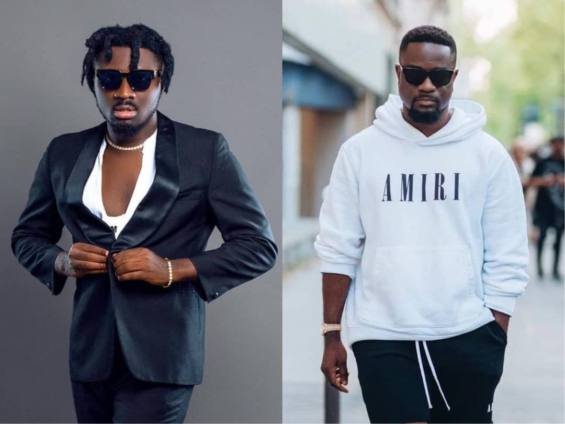 Rapper Amerado has cleared the air on the ‘Sarkodie’ reference in Eno Barony’s ‘The Finish Line’.

The Abotrɛ rapper said he was eulogizing the two-time BET Award winner for his hard work in the Ghanaian music industry, contrary to a conclusion drawn by some music fans from Amerado’s verse on the track.

“I was trying to praise Sarkodie for the works and efforts that he is putting in the industry,” Amerado told Giovanni on TV3.

He was quoted rapping in The Finish Line, “Artiste of the Year category hɔ da biaa one rapper.”

In essence, Amerado does not seem to comprehend the reason Sarkodie [being the only rapper] often gets nominated in that category.

The Yeete Nsem curator believes that it is time other rappers made it to the list for the rap scene to be “dominant”.

“Why should it always be him?” quizzed Amerado. “He is holding the mantle – it’s always him. It’s about time [maybe] in the Artiste of the Year category, we have about four or five rappers, with that we can accept our dominance in that category,” he added.

The Obiaa Boa rapper went on to admonish fellow rappers to follow the footsteps of Sarkodie to become successful and influential as he is.

Meanwhile, shortly after The Finish Line was released, the reigning ‘Best Rap Performance’ titleholder, Lyrical Joe decided to own the “fight” and hurled several shots at Amerado in an untitled freestyle projected on content creator Kwadwo Sheldon’s YouTube page.

Although Amerado did not take a direct swipe at LJ, the latter chose to reply to the Death Sentence rapper, saying that he [Amerado] got “murdered” by a female rapper on a rap song.

Lyrical Joe went on to accuse Amerado of mirroring and living under the shadows of Sarkodie.

When asked whether he would pen a reply to Lyrical Joe, Amerado responded, “Let’s leave it to the gods”.