I will use my second term to correct my past mistakes - Newly elected Upper West NPP chair - MyJoyOnline.com 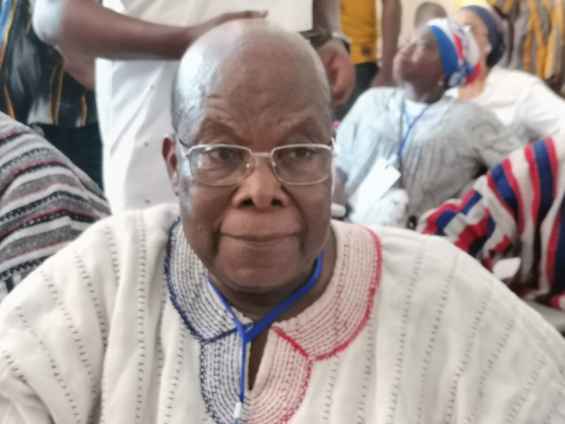 Upper West Regional Chairman of the New Patriotic Party, Saanbaye Basilde Kangbere, has stated that the decision by delegates to retain him as the party’s chair will give him the opportunity to correct some mistakes he made in his previous term.

According to the 74-year-old retired Saudi Arabia university lecturer, retaining him meant that the people have faith in him, and he must therefore not disappoint them.

Mr. Kangbere said his reelection indicates that people want him to succeed and he can count on that to help the NPP break the eight in 2024.

”I just have to look back, because they say hindsight is the best teacher. I will look back and see where I have gone wrong, listen to advice as to where to go, so that I don’t make the same mistakes again”, he stressed.

He was speaking to the media after he was declared the winner of the chairmanship election.

Four incumbent executives lost their positions in the election.

Mr Kangbere who is better known by his supporters as ‘heavy weight chairman’ says he has lots of hope in the new crop of executives elected.

According to him, although most of them are new and not from his first team, he believes they can work together for the success of the party.

”You don’t know anybody’s mind but once you have offered yourself to serve the people, you will do so sincerely. I can count on their sincerity and I believe they will go with me because if they lose, it’s not Kangbere’s game but everybody’s game.”

He also dismissed claims that he doesn’t stay in the region but only comes around when the President is visiting the region or there is money to be shared in the region.

”You don’t vote for persons who will sit aloof and wait for manna to fall from heaven. You vote for people who travel out of the region and look for jobs and opportunities which will better the lives of the people. What is here in Wa that I can get for you? Everything is in Accra.”

“If you want to deliver to your people, you have to go to Accra and lobby for your people. If you want me to stay in Wa, I will,” he said.

Cletus Aapengnuo did not have the same luck as he was defeated by former Mayor of Wa, Alhaji Aziz Mohammed Gado.

The position of the party’s Regional Secretary went to Dr, Daniel Tanko who for the past 8 years has been the Regional Treasurer of the party.

He will be assisted by Yussif Alhassan who defeated Yakubu D Kanyiri and Ismail Kamaldeen.

There is also a new face in the regional organizer position.

He is businessman Alaska B Kanton who defeated the incumbent, Mustapha Goveir together with three others.

The position of the Youth Organizer of the party was won by Hamid Saani while the Treasurer’s position went to Alhassan Suleman.

There was however a tie in the Regional Women’s Organizer position.

Both Nancy Dery and Mumuni Minaata Bakuri polled 76 votes each and are set to go for a rerun.

The beauty of the election was nearly marred when the secretary to the NPP Election Committee, Lawyer Mujeeb Kelle had an altercation with the incumbent Nasara Coordinator, Osman Mohammed.

The latter is alleged to have slapped the former. The police then arrested the Lawyer to ensure crowd control but he was subsequently released.