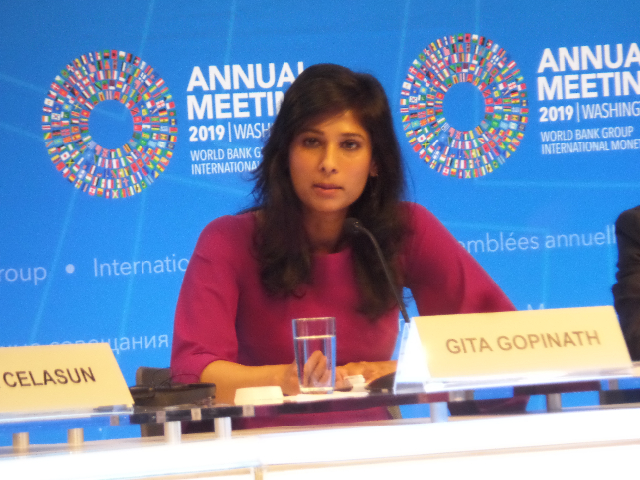 The Fund is now projecting a 7.5 per cent growth rate for the country by December 2019.

This was contained in the IMF’s World Economic Outlook Report released on Wednesday at the ongoing IMF/World Bank Annual Meetings in Washington DC.

The IMF in April this year projected an 8.8 per cent growth rate for Ghana.

The Britton Woods institution was then basing its forecast on expected pick up in commodity prices, oil as well as some policy response measures that the government is expected to implement this year.

Despite this downward review, this would still be the highest expected growth rate for Ghana by IMF since 2017, when the FUND then projected an 8.1 per cent GDP growth.

What influenced this revision by the IMF?

Sources close to the IMF say the revision was due to the expected reduction in crude oil production as well as oil prices declining on the international market. JoyBusiness understands that the move was also influenced by the reduction in cocoa production by the country than was earlier forecast by COCOBOD.

Earlier this year, Bloomberg News reported that Ghana would not be able to achieve its cocoa production target due to issues with swollen shoot diseases.

COCOBOD initially projected an annual harvest of 900, 000 metric tons but had to cut it to 800,000 metric tons. However, JoyBusiness is leaning that it ended the 2018/2019 crop season slightly lower than this target.

Based on the revised estimates captured in the 2019 supplementary budget Finance Minister Ken Ofori-Atta, the government is projecting an end of the year growth rate of 7.1 per cent.

This should mean that the IMF itself a little bit buoyant about Ghana’s growth prospects than what the government of Ghana is putting out.

However, some analysts have told JoyBusiness that it might be prudent to be moderate with these projections because of its impact on a country’s credibility as manager of an economy.

According to the half-year GDP estimates released by the Ghana Statistical Service growth ending June 2019, growth stood at 5.7 per cent, compared to the 5.4 per cent recorded for June 2018.

From the data, it was clear that month-on-month growth has slowed slightly, due to developments in the oil sector.

IMF and Ghana’s inflation outlook for this year

The IMF in the World Economic Report is also projecting an end of year inflation outlook of 9.3 per cent for 2019.

It is not clear for now whether they had factored the rebased Consumer Price Index that the Ghana Statistical Service released this earlier this year into this projection.

This reduced the inflation rate from the over 9 per cent range to 7.8 per cent for the month of August 2019This is a little below Bank of Ghana’s medium-term inflation outlook of 8 +/- 2.

Governor of the Bank of Ghana Dr Ernest Addison at the recent MPC Meeting noted that the bank may soon have look at review the inflation target when the current term expires, possibly looking at a lower band.

Impact of this projection on Ghana’s economy

The revision may not come with any serious negative impact on the country’s economy. This is based on some engagements that JoyBusiness has had with some economists on this latest forecast by the IMF.

Some of them have told JoyBusiness, it is because the revision has been impacted external factors, which has affected demand for our commodities and exports.

Others are of the view that situation calls for some drastic measures to lessen the impact of decline earnings from exports on the economy, like possibly cutting down on export to accommodate revenue shortfalls.

What is the IMF Global Economic Outlook report?

The 188-page report put together by the research department of the IMF looks at the global economy, opportunities, threats as well as reviewing the economics 189 members of the Fund.

It is based on historical data and projection based on information picked up by IMF country desk offices in the contest of their mission to the member countries.

IMF on the global economy

On the global level, the IMF projects that growth would slow down, to reach three per cent. This is the slowest since the recent global financial crises.

According to the IMF, this was influenced by rising trade barriers and increasing geopolitical tensions.

In the October World Economic Outlook, IMF is projecting a modest improvement in global growth to 3.4 per cent in 2020, another downward revision of 0.2 per cent from its April projections.

However, unlike the synchronized slowdown, this recovery is not broad-based and remains precarious.

The weakness in growth is driven by a sharp deterioration in manufacturing activity and global trade, with higher tariffs and prolonged trade policy uncertainty damaging investment and demand for capital goods.

Besides, the automobile industry is contracting owing also to a variety of factors, such as disruptions from new emission standards in the euro area and China that have had durable effects.

Overall, trade volume growth in the first half of 2019 has fallen to 1 per cent, the weakest level since 2012.