In pictures: Masks and social distancing at downsized Hajj 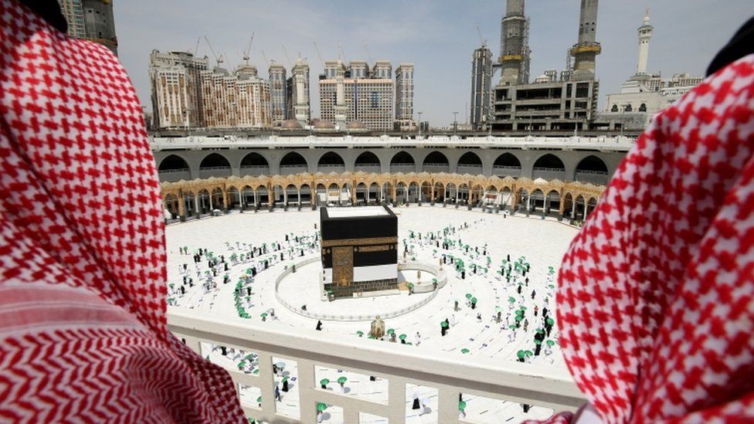 Pilgrims started to arrive in Mecca on Saturday for the second Hajj to take place since the start of the coronavirus pandemic.

Pilgrims travelling to Islam’s holiest site are expected to socially distance themselves and wear face masks.

The event is larger than in 2020 but is still far smaller than usual years.

Only 60,000 fully vaccinated residents have been allowed to take part – with participants selected from an online pool of more than 550,00 applicants.

Pilgrims had to have received both doses of a Covid-19 vaccine and be aged between 18 and 65 without chronic illness to be eligible.

Some of those taking part were photographed waiting for official transportation to Mecca’s Grand Mosque on Saturday.

Pilgrims travel to Mecca’s Grand Mosque to perform tawaf, a ritual where they circle counter-clockwise around the Kaaba – a large cube-like structure seen in Islam as the most sacred point on Earth – seven times.

Worshippers will then continue with a five-day pilgrimage at other nearby holy sites.

The Hajj is usually one of the world’s largest religious gatherings – with an estimated 2.5 million people taking part in 2019.

Making the pilgrimage is one of the Five Pillars of Islam – considered an obligation for every Muslim to undertake at least once in their life time, if they are able to.

The Hajj Ministry said this year’s event is being carried out with the highest levels of health precautions because of the pandemic.

“Every three hours, 6,000 people enter to perform the tawaf on arrival,” spokesman Hisham al-Saeed told the AFP news agency. “After each group leaves, a sterilisation process is carried out at the sanctuary.”

Officials also said pilgrims were split into escorted groups of 20 with pathways set out to keep people socially distanced.

It was estimated that only about 10,000 Saudis took part in July 2020, with no major outbreaks reported.

Saudi Arabia has recorded more than 500,000 coronavirus infections and 8,000 deaths during the pandemic. More than 21.5 million vaccine doses have been administered so far, however, only about 10% of the population is fully vaccinated, according to Our World in Data.