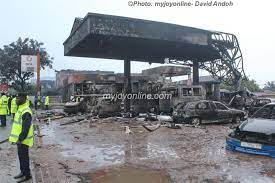 Friday, June 3, 2022, will be seven years since Ghana experienced a twin disaster that claimed over 150 lives.

The tragedy occurred after several hours of torrential rainfall in the capital city, Accra.

During the downpour, fuel leakage from the GOIL station at the Kwame Nkrumah Circle caught fire from a cigarette stub near the area resulting in an explosion alongside the flood.

Over 150 people died, and hundreds of people suffered severe burns in the unfortunate incident.

The floods were attributed to blockages in Accra’s main storm drains, resulting from the non-desilting of the drains, including buildings and structures by squatters that had blocked waterways.

The lower parts of the Odaw River were blocked by settlers who reclaimed substantial portions of the Odaw channel and built houses, mosques, churches, and a market on it, reducing the discharge capacity of the Channel into the Korle-Lagoon.

The GOIL station was used as shelter during the heavy rains and flooding from several days of rain in the city.

It was jam-packed with people, cars and buses, waiting to leave when the rain subsides.

According to reports, about 96 people taking shelter at the Station were killed by the fire.

Due to the flooding, water mixed with the fuel, and when the tanks exploded, the water caused the fire to spread faster to nearby buildings, killing more people.

It was a devastating sight to hold as victims screamed and wailed for help, but little could be done because it was still raining heavily.

Ghana’s President at the time, former President John Dramani Mahama visited the site and called for three days of mourning from June 8, 2015.

He also authorised a GH₵ 60 million ($14.5 million) recovery fund and promised to push for legislation to prevent building on waterways to prevent such accidents from happening again.

At a memorial service in remembrance of the victims organised by the Accra Metropolitan Assembly (AMA), in 2017, President Nana Addo Dankwa Akufo-Addo consoled the victims and expressed the Government’s commitment to ensure that the victims received what was due them.

He also said, “Government is determined to resolve the sanitation problem with regard to the construction of efficient drainage systems to avoid the repetition of the disaster. Construction of an underground sewerage system to absorb the large volumes of water during torrential rains will begin soon.”

There were also several interventions from corporate bodies and the Government to compensate the families of the departed and the survivors.

However, seven years since the incident, it seems the country has not learnt much from it.

Year in, year out, the rains come and go and still, the core of the problem still stares us in the face as the capital is not spared from floods resulting in damage and loss of lives and properties.

We have already recorded several incidents of floods in many communities in Accra, including the Kwame Nkrumah Circle, Kaneshie, Dansoman, Teshie, flamingo, and Mataheko, this year.

The Municipal Chief Executive for the Korle Klottey Municipal Assembly, Nii Adjei Tawiah, in an interview with the Ghana News Agency, said the twin disaster was a memory the Municipality would continue to remember for years.

He said the incident was a result of problems created by people’s irresponsible behaviour, including building on waterways, and indiscriminate disposal of waste.

“It seems Ghanaians have not learnt any lessons from the disaster because we continue to do the same things..,” he said.

Nii Tawiah said the issue of floods in Accra had persisted for years and there was a need for concerted efforts by stakeholders to bring it to an end.

He said the Assembly was considering putting out long term measures in tackling the problem, which includes awareness creation, relocation of structures and constant dredging and desilting of the drains.

“Government through the Works and Housing Ministry has managed to get the Assemblies working more closely together and providing technical knowledge and resources under the Greater Accra Resilient and Integrated Development project (GARID),” he added.
The Project works to improve flood risk and solid waste management in the Odaw River basin and improve access to basic infrastructure and services in the targeted flood-prone low-income communities in the Greater Accra region.

The World Bank-funded project is the first in a series of projects designed to build the resilience of the national capital with the initial phase covering a five-year period between 2020 and 2025.

Nii Tawiah said under the project, the Assembly had been supported to create awareness and reconstruct some drains within the Municipality, whiles the Ministry was currently investing a lot for work to be done on the Odaw drain.

“The contractor has been engaged and all processes have been completed for work to commence before the end of the year.”

On the issues of support for victims, the MCE said because he had witnessed the disaster at Circle, he was instrumental in commemorating the day every year.

“When the incident happened, government, individuals and neighbouring countries provided some support for the victims. We cannot say if it was for compensation or not, but as an Assembly, we have been collaborating with them to commemorate the day…”

Some victims and families of those who died told the GNA that all promises made to them were not fulfilled.

Mr Alex Mensah, a commercial driver and a survivor, said he had gone to the GOIL station to buy fuel and, “All of a sudden, we heard a loud sound and saw the fire coming in our direction afloat the water. I did not know what happened again. I only woke up at the 37 Military Hospital. My conductor (mate), the passengers, all my friends died in the fire.”

He said he spent over nine months in the hospital, and that it was only the Former Mayor, Alfred Okoe Vanderpuje, who gave him some money to undergo plastic surgery.

“Apart from him, I have not received any support from anyone. I heard the Benin government donated some monies to be given to us, but I did not receive anything.”

He said life had not been easy for him since the incident, saying “I got totally burnt and till now I have difficulty seeing well with both eyes. I don’t have a stable job now, but occasionally, I take spare driver jobs from some colleagues and that is what I use to cater for my family.”

He appealed to authorities to come to their aid.

Madam Mary Adom, another survivor, while acknowledging the government’s support in the initial stages in payment of their medical bills, said it was not enough because they were still struggling to make ends meet and to cater for their families.

She also acknowledged that in 2015, they received some monies from the government through the Benin government, and that ended it.

“Our conditions are disheartening. Some of us still do not have sleeping places and have no jobs, and others still have medical issues that needed to be attended to, so we plead with well-meaning Ghanaians to come to our aid.”

In 2019, a seven-member Special Disbursement Committee under the Chairmanship of Mr Seji Saji, Deputy Director of NADMO, disbursed GHC 814,000.00 out of GHC1,030,258.61 funds to support the victims.

It is seven years. The wounds are fresh just as we still have our drains choked and waterways blocked.

We are simply awaiting another disaster. But you and I must not allow it to happen. Let us all play our roles as responsible countrymen by keeping our surroundings clean, disposing of refuse appropriately and avoiding building on waterways.

DISCLAIMER: The Views, Comments, Opinions, Contributions and Statements made by Readers and Contributors on this platform do not necessarily represent the views or policy of Multimedia Group Limited.
Tags:
June 3 disaster