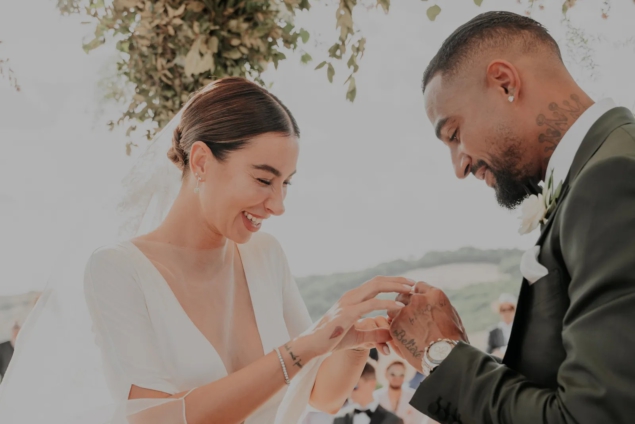 Ghanaian footballer, Kevin-Prince Boateng, has tied the knot a little over a year after divorcing his ex-wife.

The footballer married his Italian girlfriend, Valentina Fradegrada, whom he has been dating since 2021. The couple made their relationship official on Saturday, June 11.

Kevin Prince Boateng and Valentina Fradegrada married in Radicondoli, a province in Siena, a city in central Italy’s Tuscany region.

They tied the knot in front of a hundred guests in a beautiful and very romantic outdoor ceremony.

The Hertha Berlin footballer and the five-time Italian martial arts champion also married in the metaverse.

The two had put on sale, tickets, which immediately sold out, to participate in the (destination) ceremony, and all the proceeds as desired by the couple will be donated to charity.

Kevin Prince Boateng and Valentina Fradegrada got engaged in December 2021 but they kept it secret.

Theirs was love at first sight. “We met in August, 2021”, Valentina explained in an interview. “A few messages and an eight-hour video call, during which we talked about everything.” And now, less than a year later, the two are husband and wife.

Meanwhile, the complete story of the ceremony and the entire wedding album will be in the next issue of Vanity Fair Italy.